This article written in January 9, 1968, chronicles the acquisition and modification of, and camping with, Bob and Marilyn Martin's first RV.

A cabless World War II GI pickup may not sound much like a recreational vehicle, especially one that had long since served its time and was now surplus. Ingenuity; however, can sometimes transform even a four-wheel drive Dodge "ugly duckling." When we bought it in 1946, recreational vehicles, except for the family car, were virtually unknown, so we didn't recognize the potential of our "new" truck and it first served as a workhorse for a survey party.

The first glimmer of its recreational potential came a year later when we took it on a fishing trip to the High Sierras. On this trip, it served merely as convenient transportation that had enough space for our camping equipment. Even though the groceries, camp stove, bed roll, etc., were tossed helter-skelter into the pickup bed, it was more convenient than the family car. The canvas top may have been colder and noisier, but that was all right.

Circumstances, however, kept us from following up. The truck was put up as part of a share in a gold mining operation in Nevada. Here it spent some very unproductive years; the truck remained even though the mine never was really operated. It sat outside through the hot desert suns of summer and the freezing cold of winter. In 1950, my father-in-law and a friend went with me on a rescue mission.

We found a very sick truck. it looked far more fit for the junk pile than a 300-mile trip back to Santa Monica. The immediate problem was lack of a battery and coil. Fortunately, we had heard it had problems and had brought some supplies with us. The rest we were able to buy from the gasoline station owner who had been storing truck. The canvas top was long since gone; this was January, and it was very cold—about 20°F. To keep from freezing, the driver equipped himself with three pairs of pants over longjohns, two shirts, a rather huge and bulky sheepskin-lined leather jacket, ski gloves, and a knit cap pulled far down over the ears. Dressed this way, he could last for about a half hour to an hour before another driver had to take over. The truck limped home at 25 to 30 mph on four of its six operating cylinders and some very questionable tires—one so questionable, in fact, that it blew on the way—but, being a faithful vehicle, it did come all the way back to Santa Monica under its own steam. The first task then was to rebuild the engine. This rebuilding was from the ground up and was accomplished over a period of two to three months.

It was early Spring when we were finally ready for our first trip. Since the engine had been rebuilt with much love and much perspiration, we wanted to be sure that it was broken in properly We pored over the local maps to find all of the back roads so that we wouldn't be a problem on the main highways with our lesser speed. Finally, we chose Piute Mountain at the southernmost end of Sequoia National Forest, as our destination This turned out to be a most interesting experience because we found roads and locations that, I'm sure, are classed only as "byways." Our route took us through the San Fernando Valley, Saugus, San Francisquito Canyon, Elizabeth Lake, Willow Springs, Tehachapi and Caliente, and then up the south side of Piute Mountain to Claraville.

The open cab, with no doors or roof, provided an unobstructed view of the country through which we passed. It also provided no protection from the cold desert wind or the sun. Our greatest concern was that our 13-month-old son would burn from exposure to the sun, and we were so busy coating him with lotion that we neglected ourselves. As a result, he was the only unburned one on the trip!

Part way up the mountain, we came to a beautiful, cool mountain stream. This was a new experience for our son, so we decided to stop for a moment. As we stopped, so did the truck engine—and it wouldn't restart. There was nothing to do but wait for the engine to cool down—much to the delight of our child who thought that a stream was the best thing he had yet seen. This presented a lesson my wife says I have never quite learned: Don't be in such a rush to get there (wherever that is) that you pass up many worthwhile and interesting places on the way. 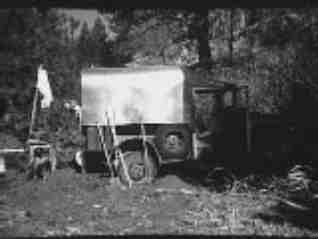 The trip sold the whole family on the life of a camper, so we began the never-ending improvements to our recreational vehicle. The first step was to find some bows to provide a frame for a canvas top After a search through surplus yards, we found three bows from a military "6X" vehicle that gave us the desired six-foot width. Once these were installed, we had a canvas top made. Now we were protected from the weather and our camping season was lengthened. This canvas top lasted for a year or so, but canvas does have its problems. Besides being noisy, it contracts in the cold or damp weather. With cold fingers, it becomes quite a challenge to fasten each of the seemingly hundreds of snaps necessary to close the doors. It also took a lot of ingenuity to find out how to close snaps that were on the outside when you wanted to be inside! The only entirely successful technique we ever found was to have someone who wasn't going with us do the honors. A less satisfactory solution that resulted in all the snaps being closed was to open the windshield, which tilted forward, and crawl into the cab after fastening all the snaps. As the canvas aged and we struggled to close the snaps each time, we began to plan for an improved top and doors. Our goal was a more durable material and real doors with hinges and latches.

We began with surplus aluminum sheet and a rivet gun. The aluminum sheet was attached to the wood frames with screws and the sheets were joined by riveting. We decided we liked the convertible idea because you could see so much more of the country once you were at your destination, so we left the canvas top from the windshield to the front bow of the pickup bed. Doors were somewhat of a problem. We wound up making a wood framework covered with canvas except for sliding plexiglass windows. These we attached to the truck with an aircraft piano hinge, which allowed us to take them off when we "converted." But a plain door really only had a single use, so we lined the inside of the driver's door with fiberglass sheet and made leg attachments. Then the door could be removed, set out from the running board on two legs, and used as a table.

As all campers know, there is never enough space or organization to your vehicle. We built side cabinets to carry our food supplies, stove, and utensils. The doors to these cabinets were designed to fold down and be held in a horizontal position to serve as a sink board and as a place to set the Coleman stove. This turned out to be a very satisfactory arrangement, for we had an outdoor kitchen and dining room. No longer was it necessary to move the many boxes of groceries and utensils out of the truck to a card table.

The truck's four-wheel drive allowed us to visit many otherwise inaccessible spots. To solve the problem of low mileage and to preserve the front end, we investigated the locking hubs that were becoming available on the market. Although the convenience of walking to the front hub and turning a lever either to lock the front wheels in place or to unlock them was very desirable, it was also more than we could afford then on our very, very low recreational budget. So we built cover plates for the front hubs and got the same result. By unbolting the existing hub and spline and replacing it with a cover plate, we had free-running front wheels that were disengaged from the front axle. When we arrived at a destination that required four-wheel drive, we removed the cover plates, rebolted the splines in place, and the front hubs were locked as before. 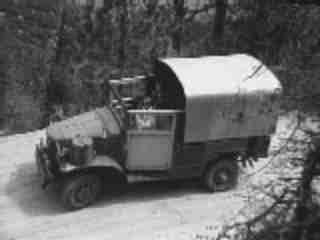 The final touch of elegance for our vehicle was a Navy gray paint job. We now had what we felt was the ideal recreational vehicle; it was warm and comfortable inside, things were arranged for our complete convenience, and there was little else to be desired.

Sadly our castle on wheels was burned in the 1956 Malibu fire. Marilyn and the boys stood in the windows of our home and cried as it was towed away.