Alan Romspert (Roms) was a friend of mine 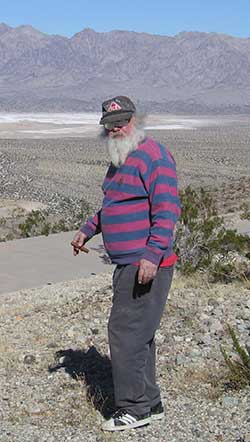 Alan Romspert (Flower Child) passed away on Wednesday, August 19, 2009. I will miss him dearly. He and I traveled and camped together for years. We collected plants, went backpacking in the mountains, went fishing, and explored the southwest deserts. When I was still teaching at Fullerton College, I would stay at his house about once a week. We would sit on his front porch, drink whiskey, and solve the world's problems. He would smoke a cigar. It was kind of like Alan Shore (James Spader) and Denny Crane (William Shatner) of the television show "Boston Legal." We, of course, carried this ritual to campfires on our many camping trips.

It was in May of 2007 when the specter of cancer reared its ugly head. Roms and I were sitting around a campfire in Cataviña. We were on our way back from Cabo San Lucas, traveling in his black Nissan. Roms asked me about a lump under his left ear that was covered by his beard. It turned out to be non-Hodgkins lymphoma. He was treated with chemotherapy and radiation and subsequently was cleared of any cancer, but apparently the chemotherapy had taken a toll on his heart. He began to experience shortness of breath and congestive heart failure was diagnosed. He had been receiving treatment for that problem, but the shortness of breath continued and in recent months he lacked energy. It didn't stop him. He continued his activities including his now famous roll-over on the road to Cataviña in 2008, and in his "newest" Nissan he accompanied the Desert Explorers on the Neal Johns trip to Baja in May 2009. In fact, Roms went fishing on Friday, August 14, two days before his long-time girl friend, Linda Harris, took him to the hospital for the last time. Once in the hospital he deteriorated rapidly. Associated with his weak heart and low blood pressure, blood supply to vital organs became diminished, ultimately leading to kidney failure and reduced liver function. Life support was removed about noon on Wednesday and he was gone by 12:15 PM.

I first met Roms in the early 70s when we both took a class in Desert Biology at Cal-State Fullerton. He was freshly back from Viet Nam. He went on to get his Bachelor and Master degrees from that institution. Even though we most often thought of Romspert as a Botanist, he did his early research on the physiology of Amphibians, and he has two scientific papers published on water relations in Amphibians. He also published a paper on the plants of the Algadones Dunes in Imperial County.

In 1976, when the program started, he began a 23 year stint with the Desert Studies Center at Zzyzx in the Mojave Desert near Baker. His contributions to the Desert Studies Center are immeasurable. Not only was he instrumental in all aspects of building the physical facilities, but through his botanical collecting he produced for the Center the best herbarium in the Mojave Desert. He collected extensively in the Panamint Mountains with the idea in mind that ultimately he would publish a flora of that mountain range. His extensive plant collection from the Panamints is now housed at the Herbarium of Rancho Santa Ana Botanic Garden. He also taught numerous courses that were offered at the Desert Studies Center, and sponsored through various universities. I shared teaching duties with him numerous times, including recent years when he and I co-taught the "Flora of Joshua Tree National Park," offered as an extension course through the University of California, Riverside.

Among the groups to which he belonged he always was a leader. His role in Desert Explorers is well known to us. He led trips, often teaming up with yours truly, in which natural history was always a component, and he organized the highly successful Silent Auction at the Desert Explorer Rendezvous. He was the treasurer of the Southern California Botanists, and over the many years during which he belonged to that organization he held every office except secretary. Without the effort Roms put in to organizing and set up, the highly successful yearly symposium of the Southern California Botanists would never have continued into its 34th year. He was also an active member of The Ancient and Honorable Order of E Clampus Vitus (the Clampers), a service group that establishes and builds historical monuments throughout the state.

We shall be telling Romspert stories for years. He was a skinflint and a collector. He collected bottles of hot sauce, and he had a huge stamp collection. I don't think he threw anything away. He saved everything including bottle caps. He clipped coupons from the "Penny Saver," and dutifully submitted receipts and rebate coupons. On desert trips he picked up discarded bottles and aluminum cans which he turned in for refunds.

Many of us remember his "thrifty" ways. He would drive out of his way to save a few pennies on gasoline. One of the great stories goes back a number of years when Roms was part of a group that was camping in the Avawatz Mountains at Sheep Creek Springs. He had left a pair of his shoes at a microwave tower on the south road to Death Valley. He talked the group into piling into a single vehicle and driving back to retrieve his shoes. It was farther than anyone thought, but he kept reassuring them it was just a little bit farther. As it turns out it was many miles away and took about a half day of driving to retrieve his pair of nearly worn out "flip-flops." That experience, among his friends, led to a new unit of measurement known as a "Roms." It referred to an unknown distance that was probably farther than you think. "How far is it to Grinderswitch Spring?' "I'm not sure, I'd say about three Roms!!"

In spite of his apparent thriftiness and gruff exterior he was a caring and generous person. He would loan money to a hapless friend, never expecting to be repaid. He would buy something, usually at a swap meet, and then give it to a friend he thought could use it. One time, knowing I was building a new deck, he bought for me 15 gallons of the old, oil-based, formula, for Thompson's Water Seal, and never would tell me how much it cost.

We also remember his famous salsa. About once a year he would purchase flats of tomatoes, onions, and chiles and spend two days cooking and canning. While Dave McClanahan most often helped with the process, I will never forget the tear-streaked hours of crying, while I chopped onions. Traditionally, at Christmas, he distributed jars of salsa to anyone who would take them. Nearly everyone did. In his honor, I may never open my last jar of salsa.

I shall never forget Alan Romspert, one of the best friends I or anyone could ever have.

There is also a photo slideshow of Alan Romspert - the photos are from the friends who loved him best.