Cabins, Mills and Tucki Too

We love to camp in Death Valley National Park and our choice is to boonie camp. Although that is allowed, park rules limit us to four vehicles. Yikes! That’s tough!

So, keeping our group size limited thusly, a few of us explored in Death Valley and environs during the recent March heatwave. Days were hot but nights were perfect.

I highly recommend that other Desert Explorers organize their own small groups and head to Death Valley this Spring.

The ﬁrst goal of our trip was a hike into the Greene Mill and cabin area about a mile west of the Emigrant Canyon Road. For those who love old cars, cabins and mills this is a rewarding hike even though it’s a bit of a grunt hiking up the canyon. The mill was developed by Thad Greene in 1952 or 53 to process tungsten. But, his ore was too poor so he sold to Erwin Denner who hoped to process gold ore from the Skidoo area. Denner sold to John Drake who had the same idea but neither was successful and the mill was abandoned around 1970. The cool old rusting car we found there was a 1946 Pontiac Streamliner.

Back in our vehicles, we decided to ﬁnd out if the road to Tucki Mine was open. It was and we ventured up a beautiful canyon for ten-plus miles before reaching the remains of Tucki which consisted of one standing cabin, one not standing cabin, four cyanide tanks and a big horizontal shaft. The Tucki was a gold mine that was worked from 1927 to 1944. While we were there a late afternoon wind starting blowing March cold. So, even though Mignon already had her beer in hand, it was decided to head to lower elevations and warmer climes. We ended up ﬁnding a nice balmy camping spot near Telephone Canyon.

After a pleasant wine infused evening, we slept well and awoke ready for another hike. Hefting our packs, we took off to explore Telephone Canyon, so named because a telephone line (as well as a road) from Stovepipe Springs to Skidoo was constructed through it in 1907. After less than a half mile hike we came to Telephone Arch. This arch is well worth expending the effort to see. A short ways beyond the arch we came to the remains of Telephone Spring and a signiﬁcant milling operation, including a nice arrastra. The spring is dry now but it used to be an important watering hole on the road to Skidoo. The arrastra was part of the “Hell’s Garden Mining Co.” whose letterhead read “The Mills of the Gods Grind Slowly, But Exceedingly Fine.” The operation evidently ran from the late 1920’s and well into the 30s. Because there was not enough water at Telephone Spring for a larger operation, a larger mill, the Gold Bottom Mill, was built in 1934 at the site now known as Journigan’s Mill. Interesting stuff!

Back in the vehicles again, we returned to the reality of civilization. Just barely surviving the sticker shock of $6.50 per gallon of gas at Stovepipe Wells, we ﬁlled up and headed north. Our destination was the Oriental Mine and Roosevelt Well. We found them both interesting, though apparently well-visited. Moving on we discovered rock ruins (Glenn affectionately named the ruins “Tule-Inn”) at the north end of Tule Canyon. We were moving higher rapidly and actually encountered snow beside our route. The afternoon shadows were growing long but, as luck would have it, we found a hunters’ cabin with a working stove and, although there was snow just outside, we spent a cozy evening inside.

Next morning we continued our exploration of the Slate Ridge Range on the north end of Death Valley and found a lot of neat old stuff. We found a stack, (yes, literally a “stack”) of old cars and a lot of abandoned buildings. We even found a very large abandoned crane that looked as if it only needed a competent operator to go back to work. Obviously not me!

The Sylvania Mill was next on our agenda. We discovered the road down Sylvania Canyon was newly graded and once again connects with the Eureka Valley Road. The wonderful Sylvania homes and cabins had sadly deteriorated quite a bit since we had last visited them, but the mill a bit down the road was a new treat. Silver-lead ore was discovered at Sylvania in 1869. It’s probable that Christian Zabriskie of Death Valley Borax fame ran a general store in Sylvania. After World War II, a man named Don Clair lived in Sylvania and operated the large mill there. He stayed in Sylvania through the 1980’s but the mill probably ceased operation in the mid 70s.

To ﬁnish out the trip, Glenn and Ron led us to pictographs along the Eureka Valley Road that Sunny and Jean had originally shown us. Then we fueled up in Dyer and camped for our last night at one of our favorite spots, Cottonwood Creek. ~ Joeso 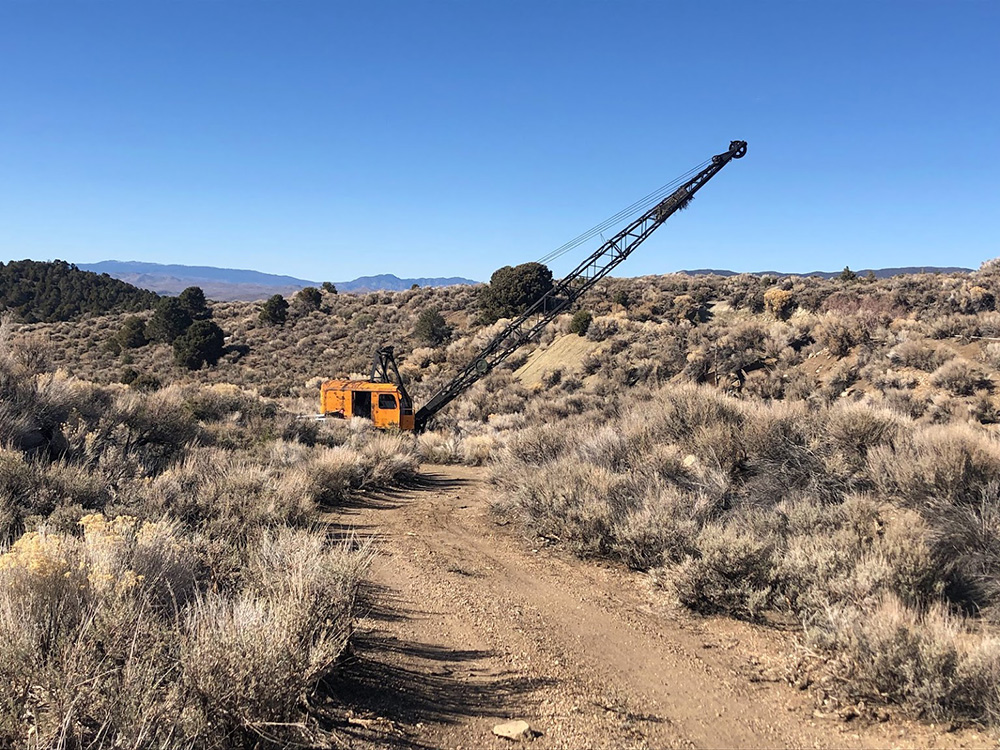 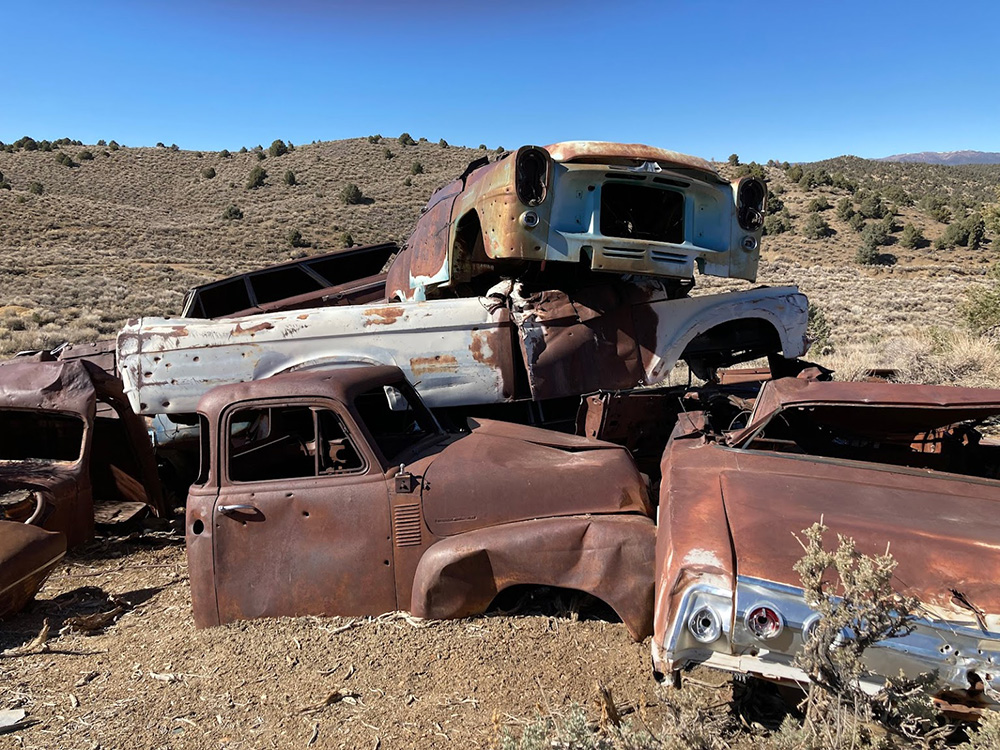 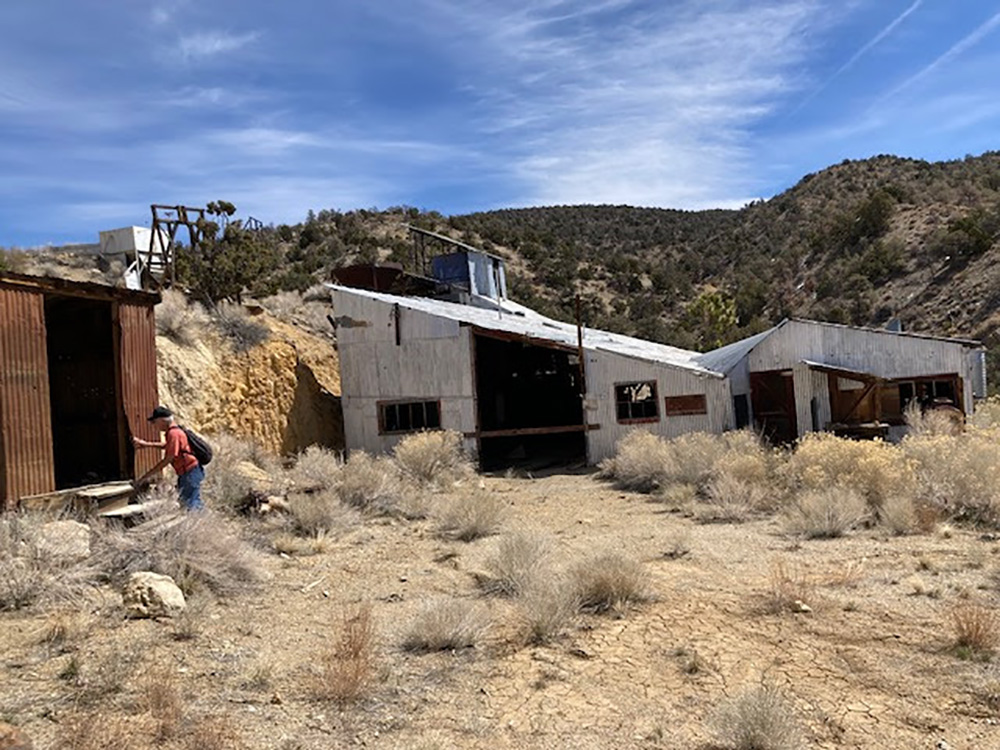 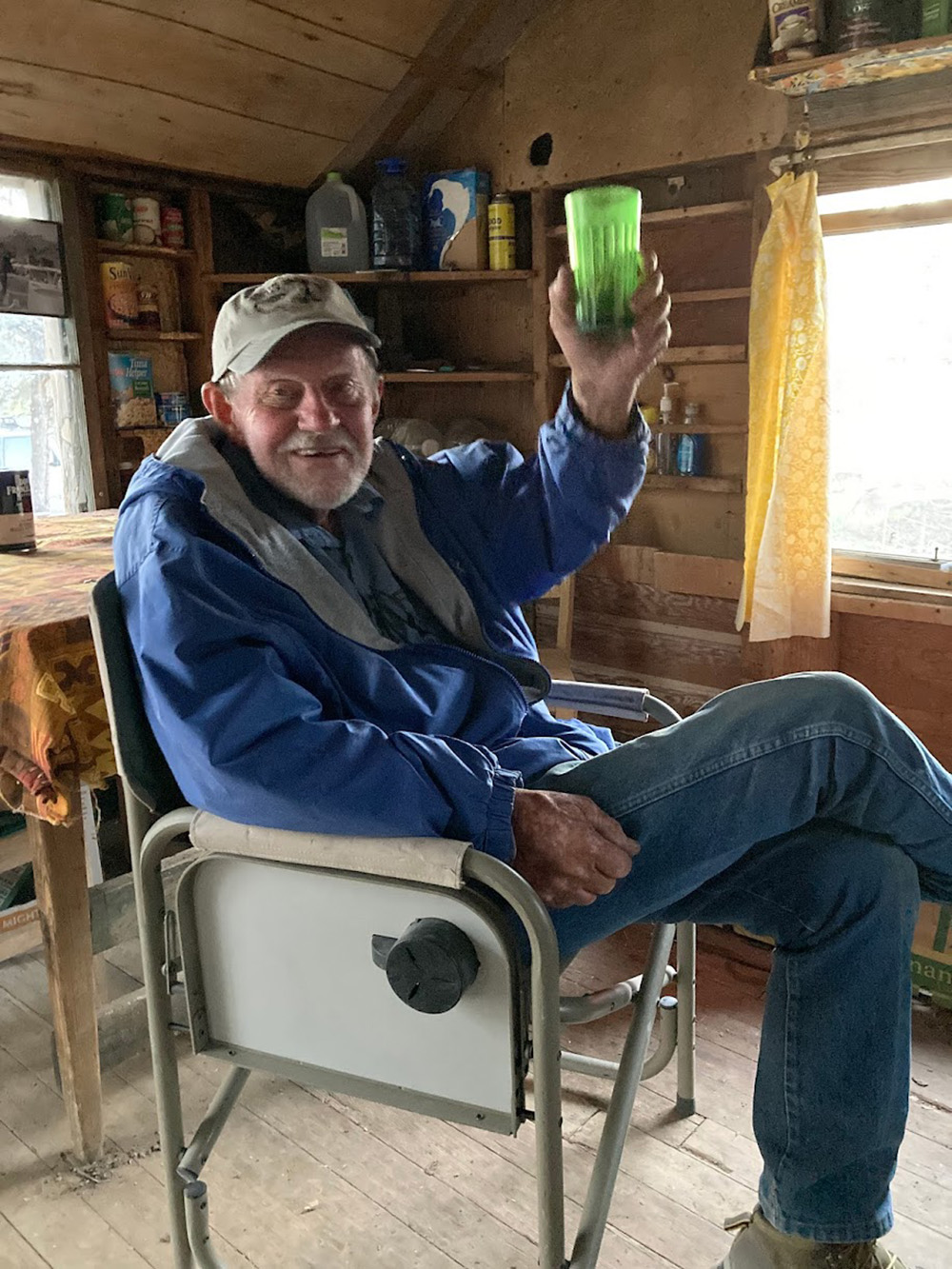 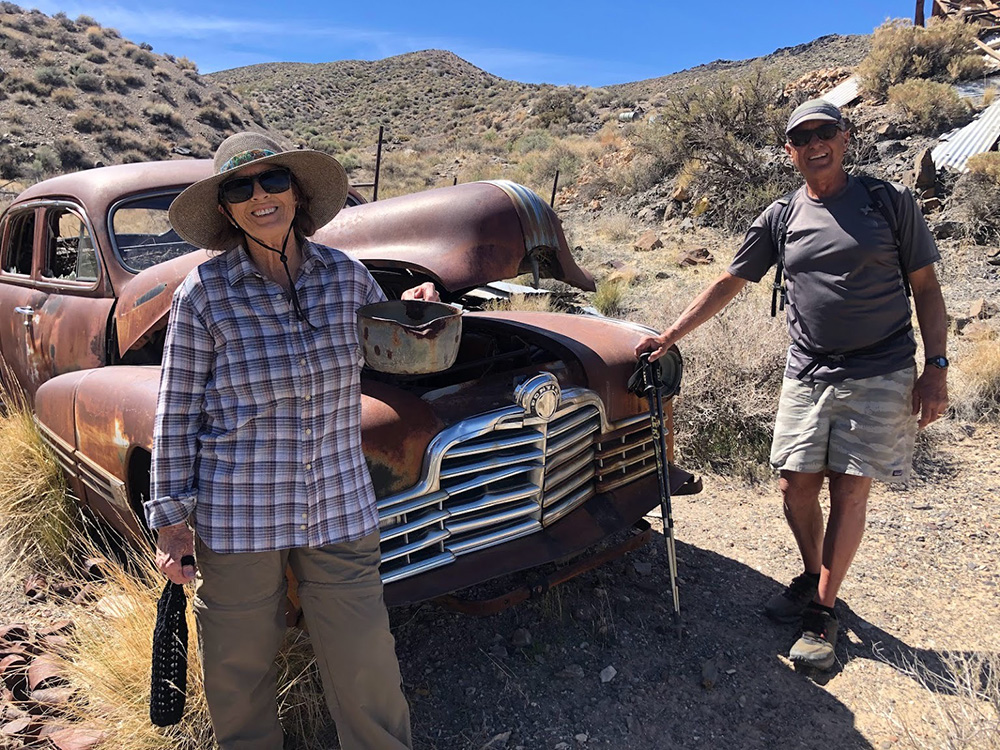 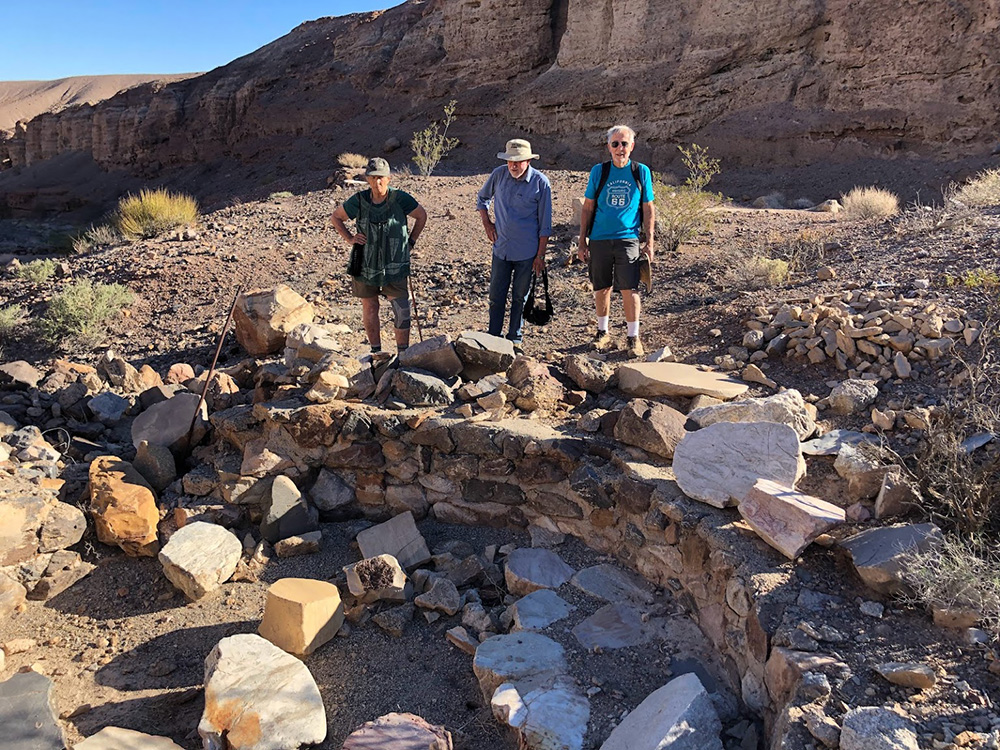 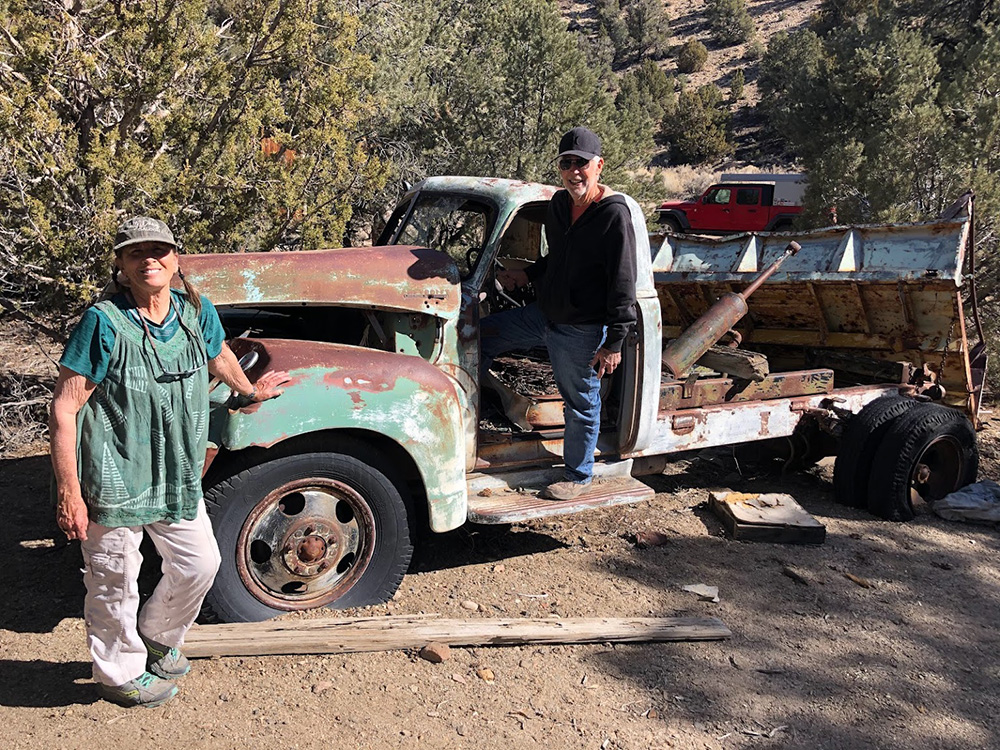 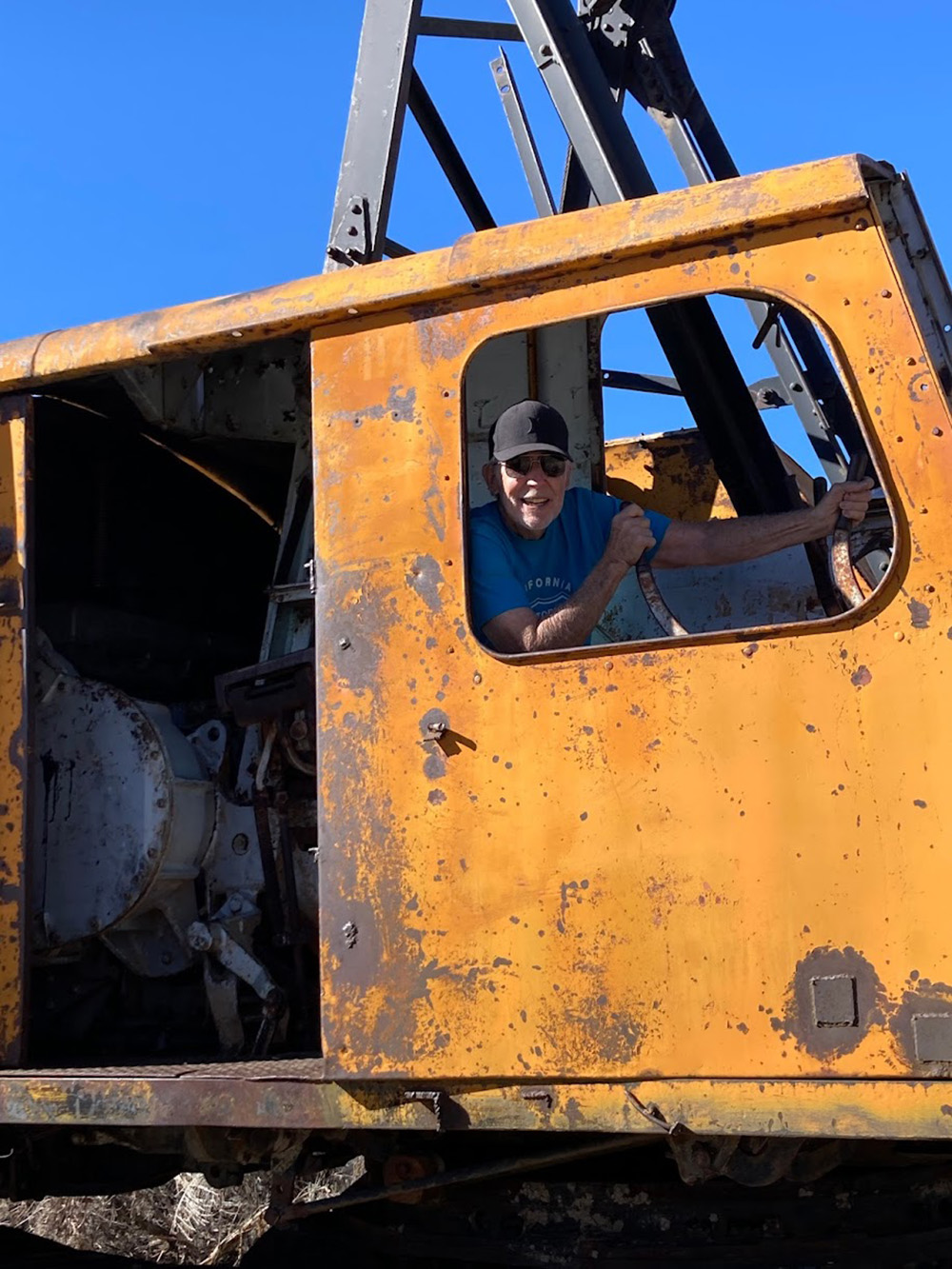 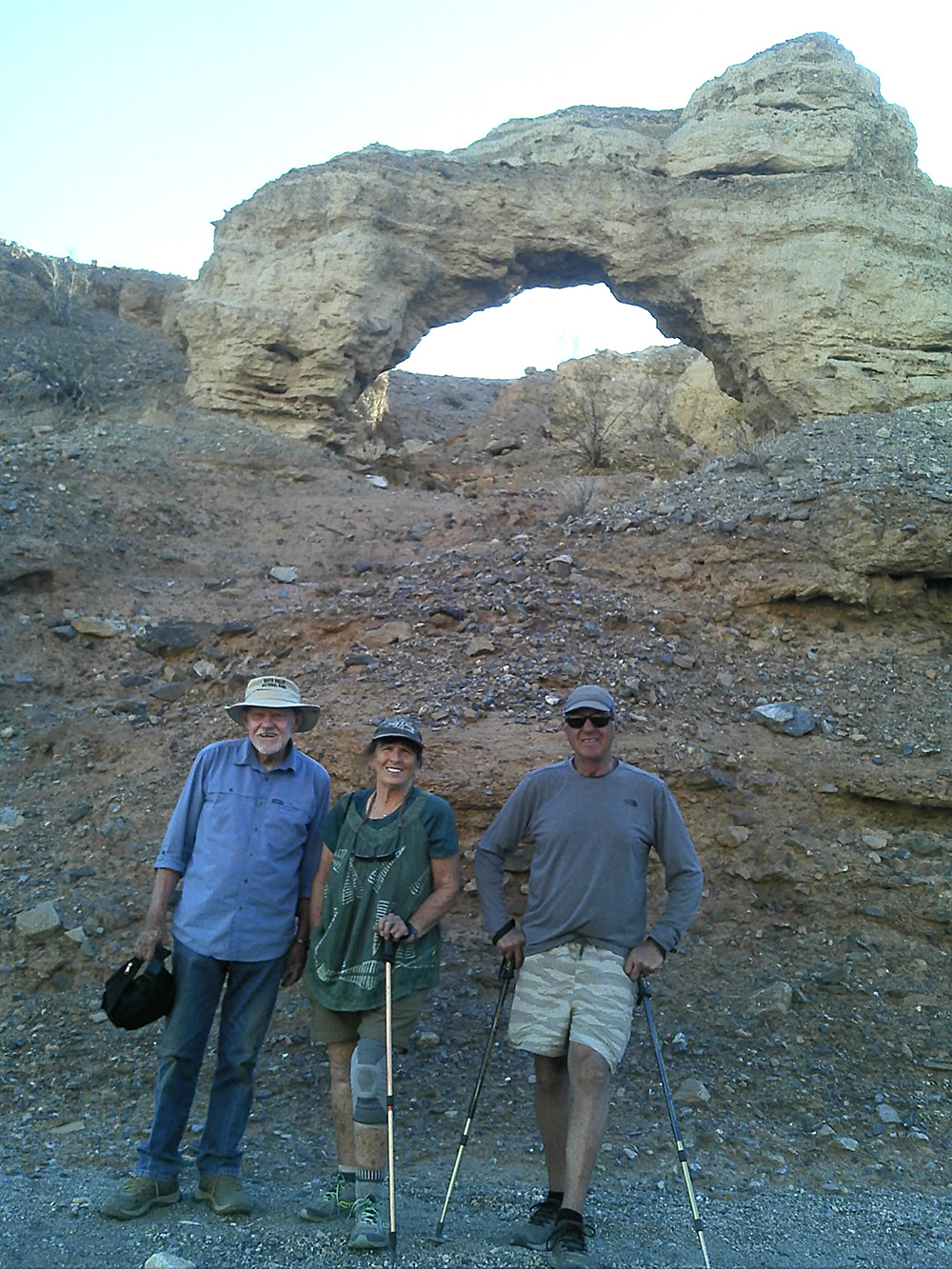