We had folks heading for the cultural hub known as Ocotillo from far and wide. Our crew of intrepid travelers included Glenn Shaw and Mignon Slentz from Nevada, Craig Baker from Sylmar, Dave Hess from Bakersfield, Bill Smith from Cypress, Dave Burdick and his buddy Dean from Corona, Mal Roode from Highland and me from Long Beach. Needless to say, various travel progress reports filtered in by email and text and as luck would have it, everyone arrived at our Friday evening camp spot at Dos Cabezas Spring well ahead of the trip leader, who showed up with barely enough time to enjoy a little time around the campfire and a ‘safe arrival’ beverage.

Saturday morning everybody gathered themselves up and we headed for the water tower crossing of the currently defunct San Diego and Arizona Eastern Railway. The day was beautiful and the desert looked terrific. Recent snows had left low spots damp and the dust was down. We turned north a bit off Mortero Wash and followed the tracks to the trailhead of our first destination, Indian Hill.

Our hike was relatively short, just over a mile each way without too much elevation gain. A few Ocotillos had blooms and some yuccas had shoots and blooms, but it was too early and still too dry for any of the small wildflowers to show their colors.

We found Indian Hill without a hitch and explored the area, finding rock art and a built-up shelter cave. Photos were taken, speculations on rock art meanings were made. No casualties to report. It was a fine walk in the desert and we saw what we came to see. It was an excellent start to the day.

Next, we made our way east out Mortero Wash to S-2, up the pavement a few miles to the Badlands Overlook and turned off the pavement to Cañon Sin Nombre (canyon without a name). This canyon is the southern entry to the Borrego Badlands and includes a winding trail through high walled canyons that show amazing twisted rock and sediment foundations and evidence of huge earth and water movement from long before recorded time. It’s pretty spectacular.

We eventually found a shady spot for lunch and watched a small parade of newly minted overlanders pass by in groups of three or four or five vehicles. Several of us speculated that all this activity and new equipment was a reflection of people being frustrated and cooped up by the pandemic over the last two years. Whatver the reason, more folks are out exploring and having a good time. All were well behaved, though a few needed some help with directions. We helped.

Our next stop was up Arroyo Seco del Diablo (dry wash of the devil) to take a look at the Diablo Drop Off, a somewhat notorious drop into the basin of the connector road to Fish Canyon that heads toward the eastern part of Anza-Borrego DSP. Hearty folks were taking the steep downhill then trying to come back up the silty, rutted, whooped out road back up to the area where we were parked and many made it. Those appeared to be the folks with front and rear lockers.

We didn’t stick around to see what happened to the stock vehicles...

We ventured back out the way we came in to Arroyo Tapiado (walled Wash) then north in a loop that would bring us to the locally world famous (?) Mud Caves. We looked. We found the interpretive sign, but no caves. They’re there somewhere but the Park Service has thoughtfully discouraged folks from finding or exploring them these days due to some unfortunate happenings in the past. Several of us had been in them years ago... What we did find was a great camp spot, level and protected on the west from wind but with a low eastern exposure for some warming early morning sun. We camped. We had a fantastic potluck feast with some adult beverages, a fine campfire and excellent company. The moon was just beyond first quarter so the night was well lit, but once it was down the stars looked like you could touch them.

Sunday morning everybody had coffee and a bite then we continued down the canyon to our bail out point. We turned west on sand back toward S-2 and the Overland Stage stop then headed north on S-2 to Blair Valley for several short hikes. The first was to check the pictographs at the eastern corner of the valley, the second was to find the morteros a bit further to the west. Both hikes are well marked on park maps.

By this time, the wind was picking up so we headed back toward S-2 and stopped for lunch. Dave Hess had a long road home so he said his goodbyes early, then we all headed back to pavement, each of us turning toward our respective homes having had a fine run through some great back country with good friends. No lives lost, very little blood shed... An excellent weekend. ~ Jay 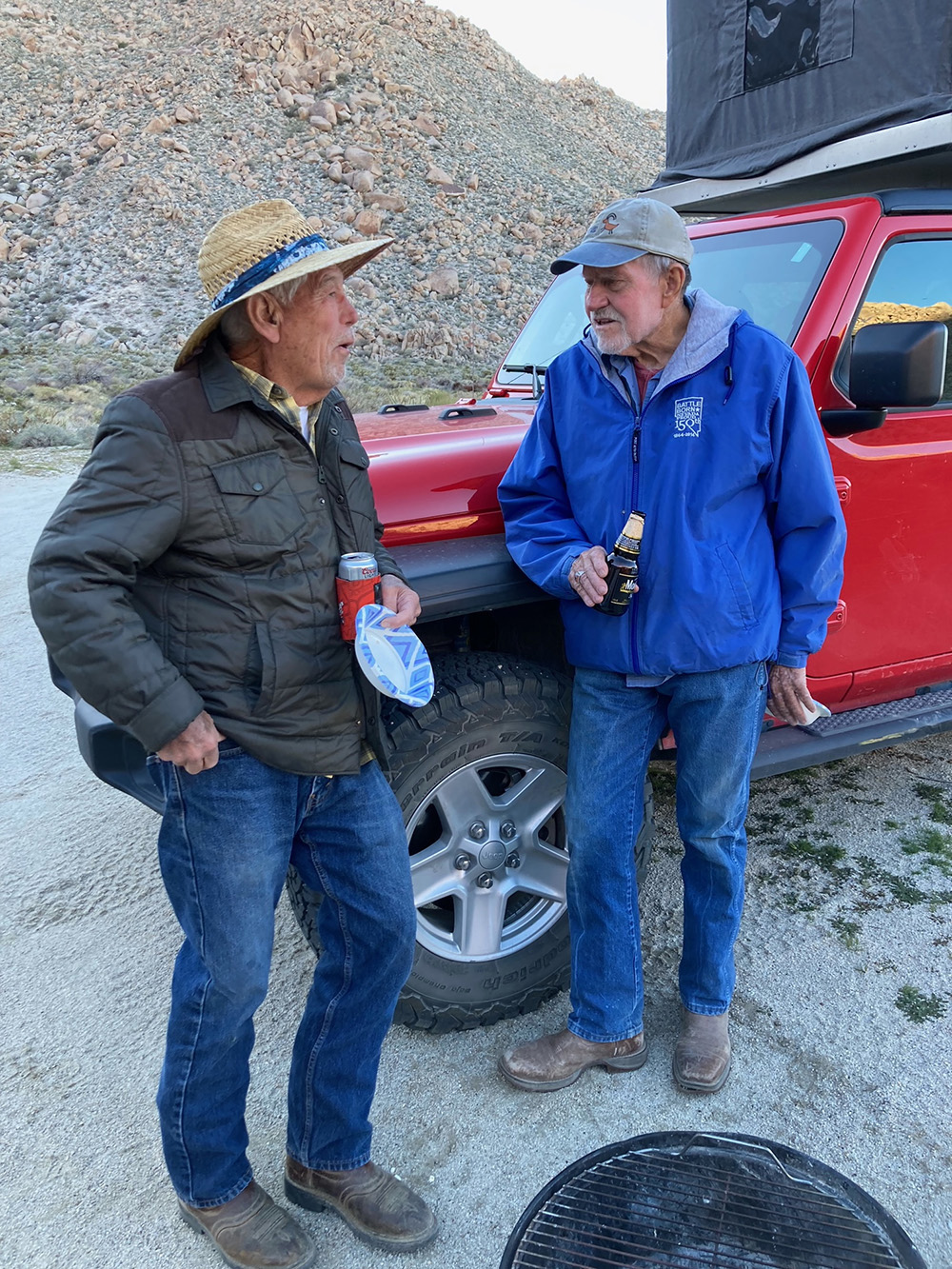 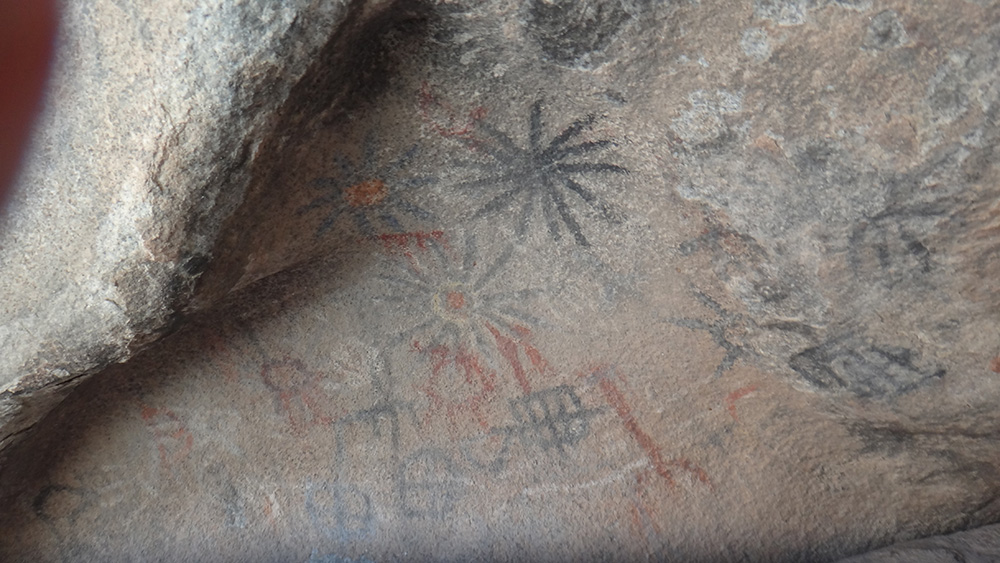 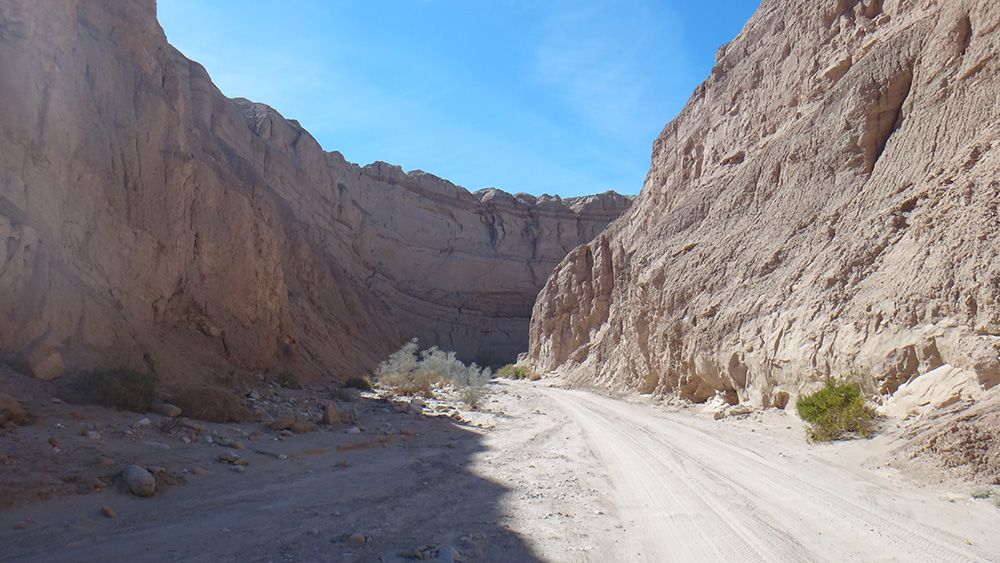 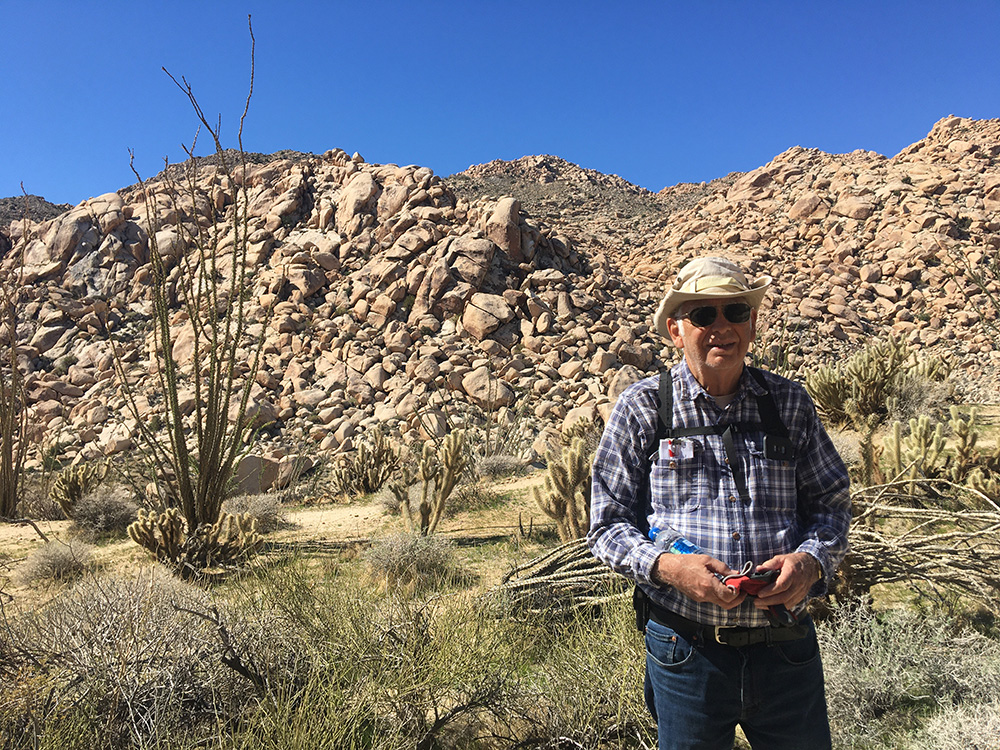 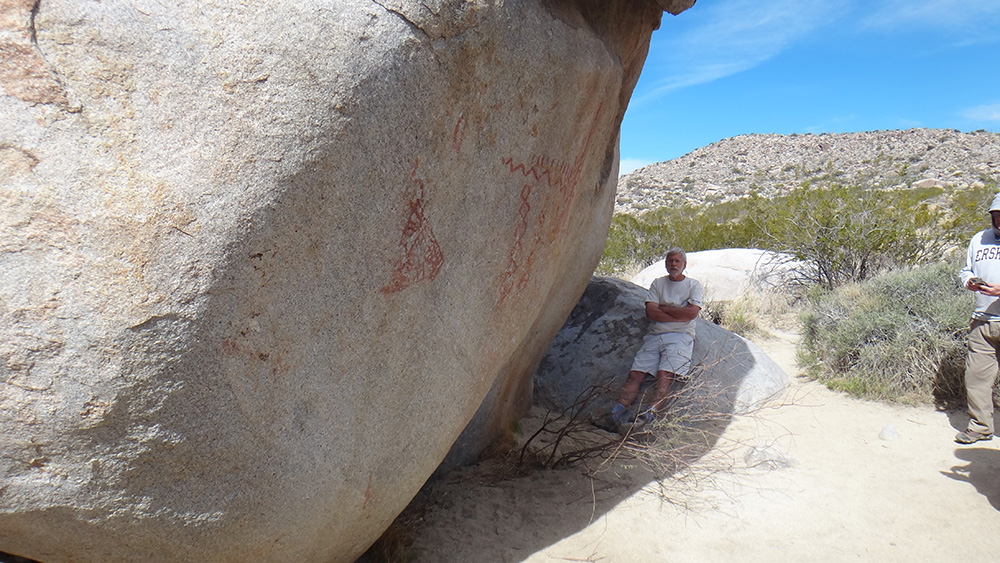 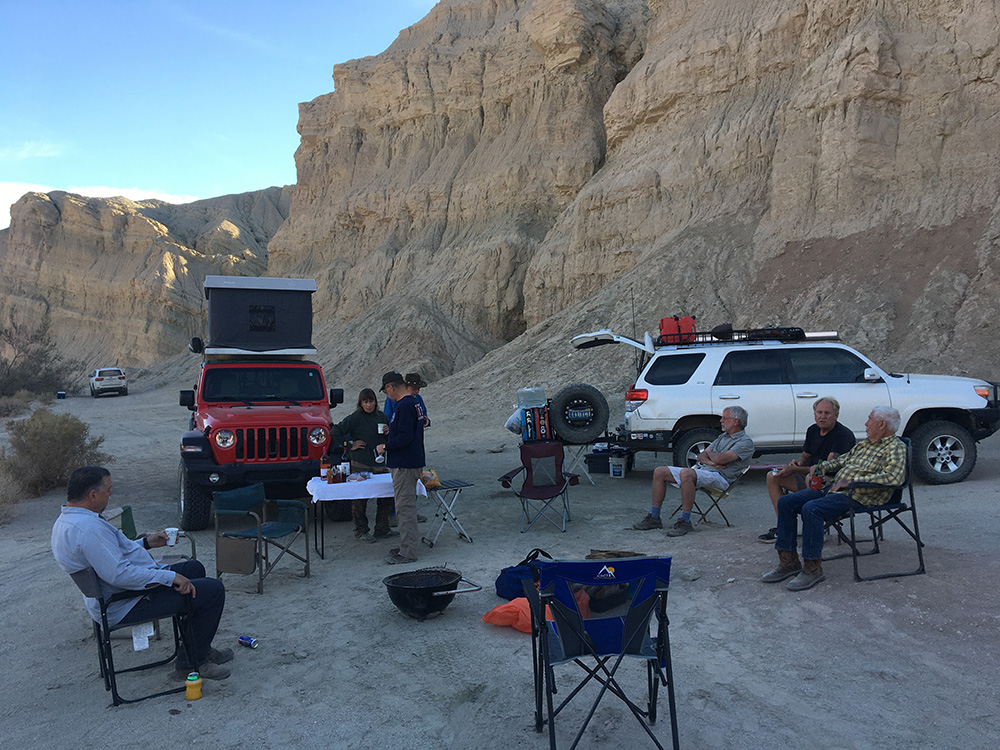 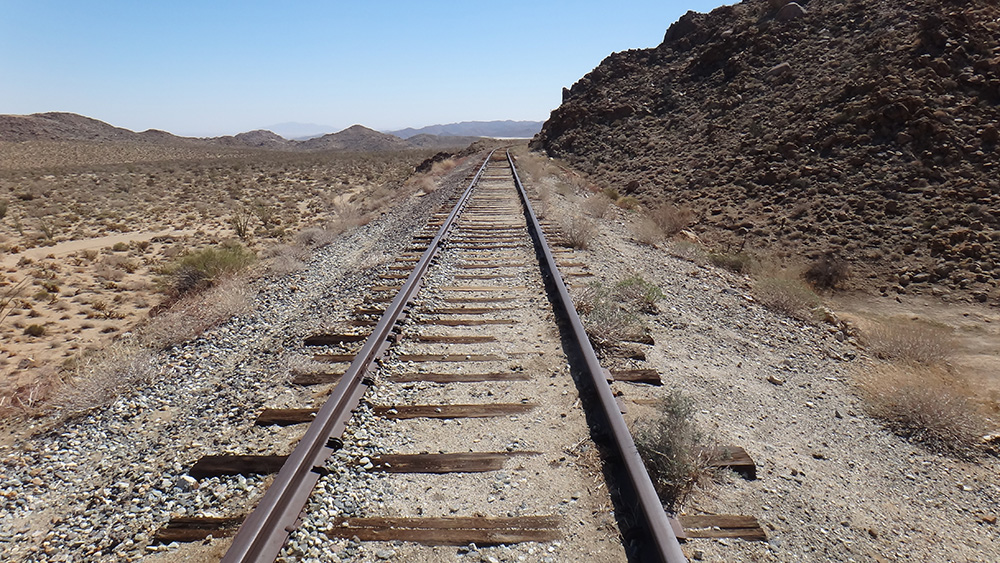 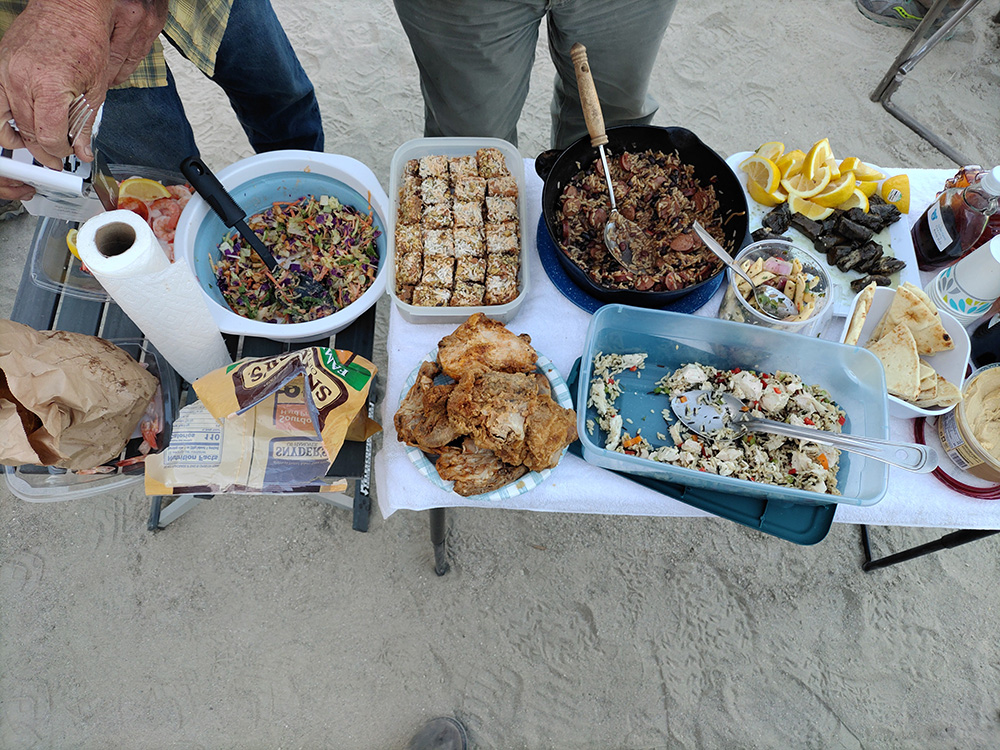 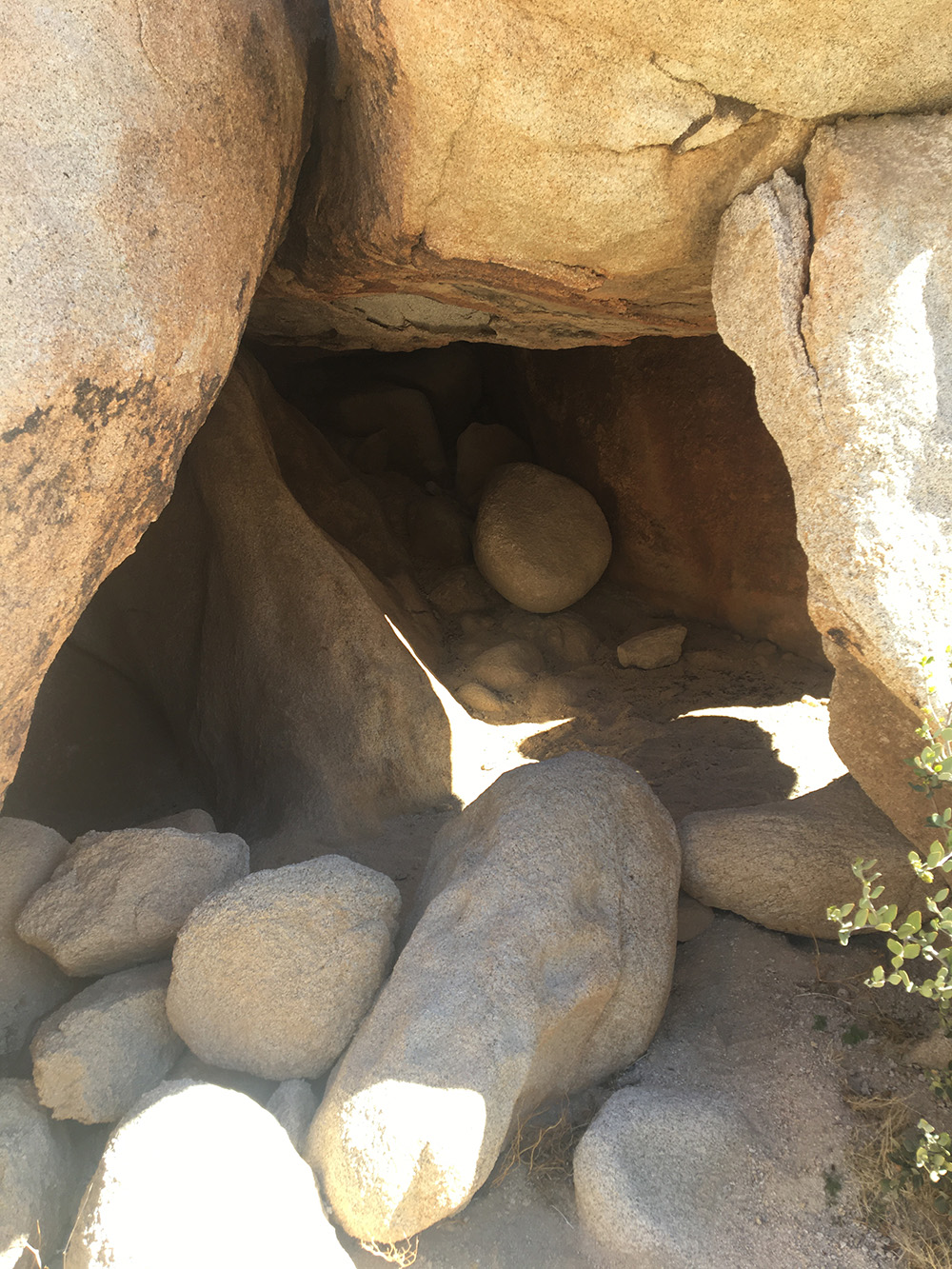 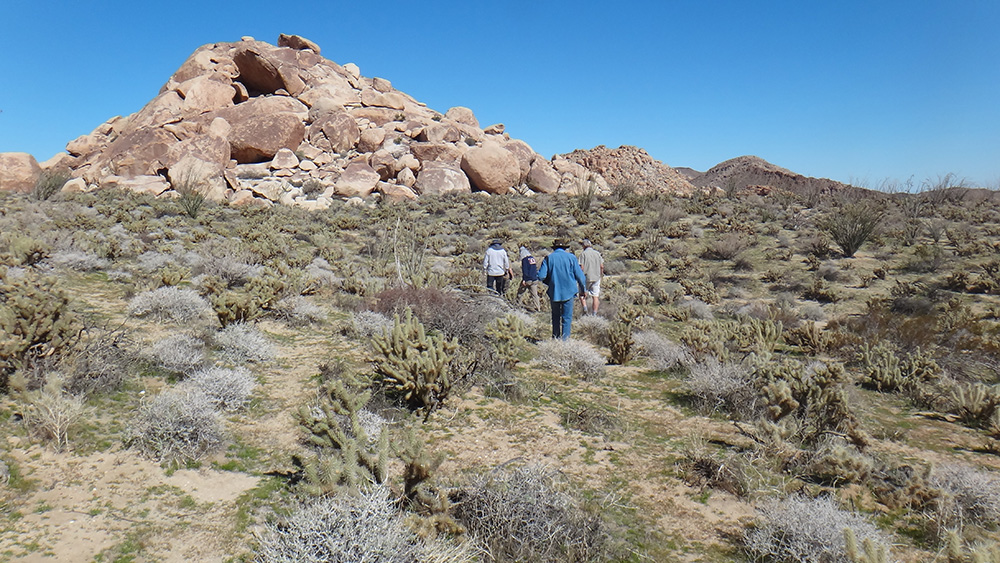 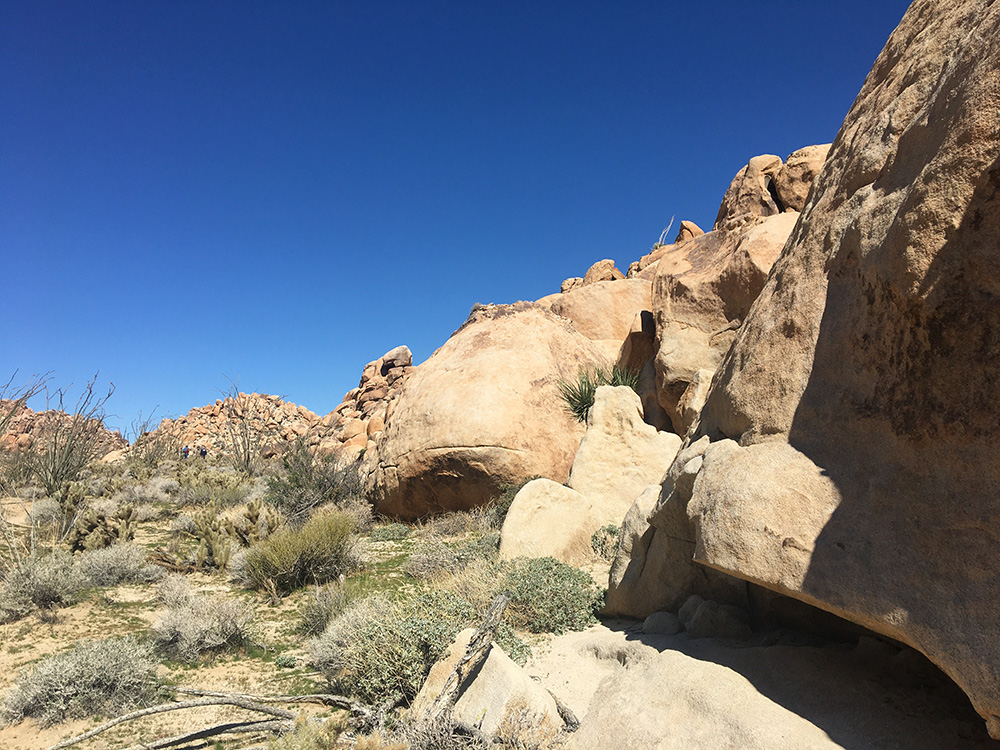 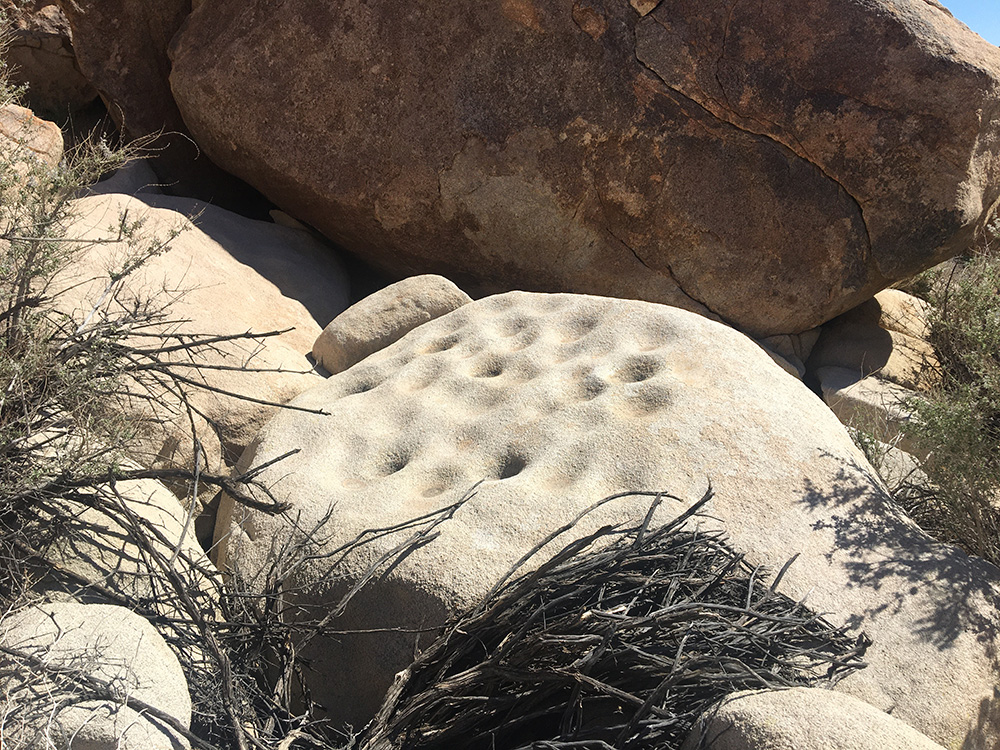 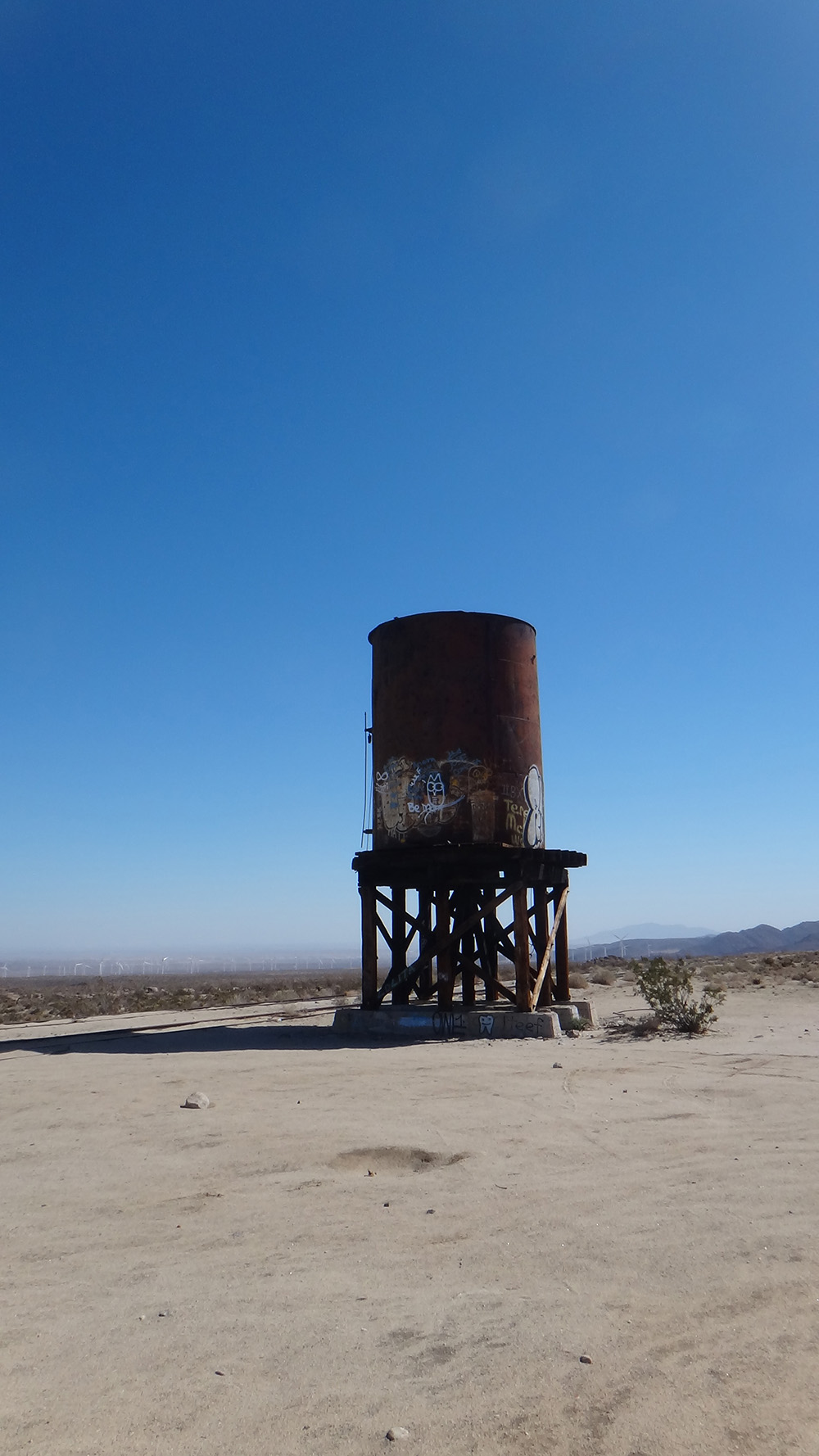 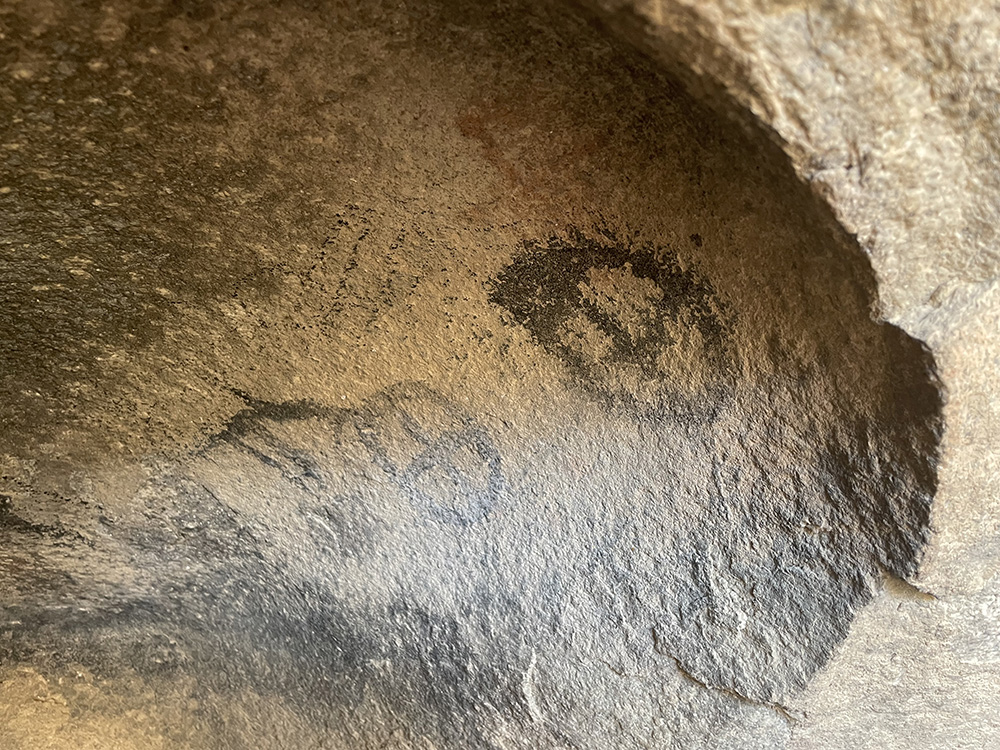 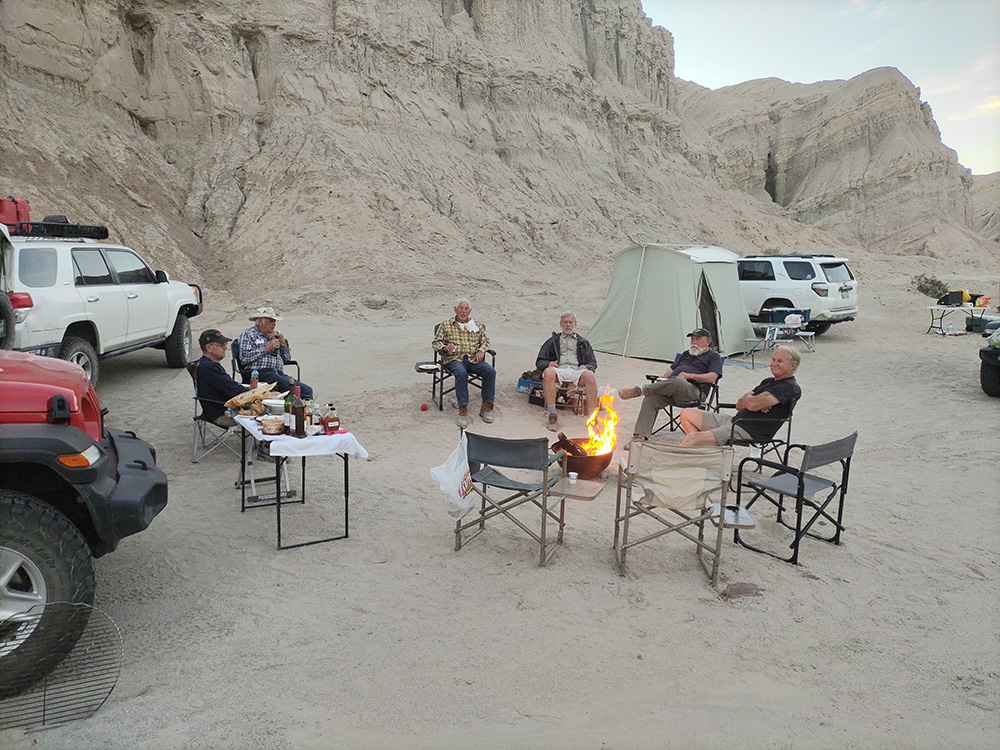 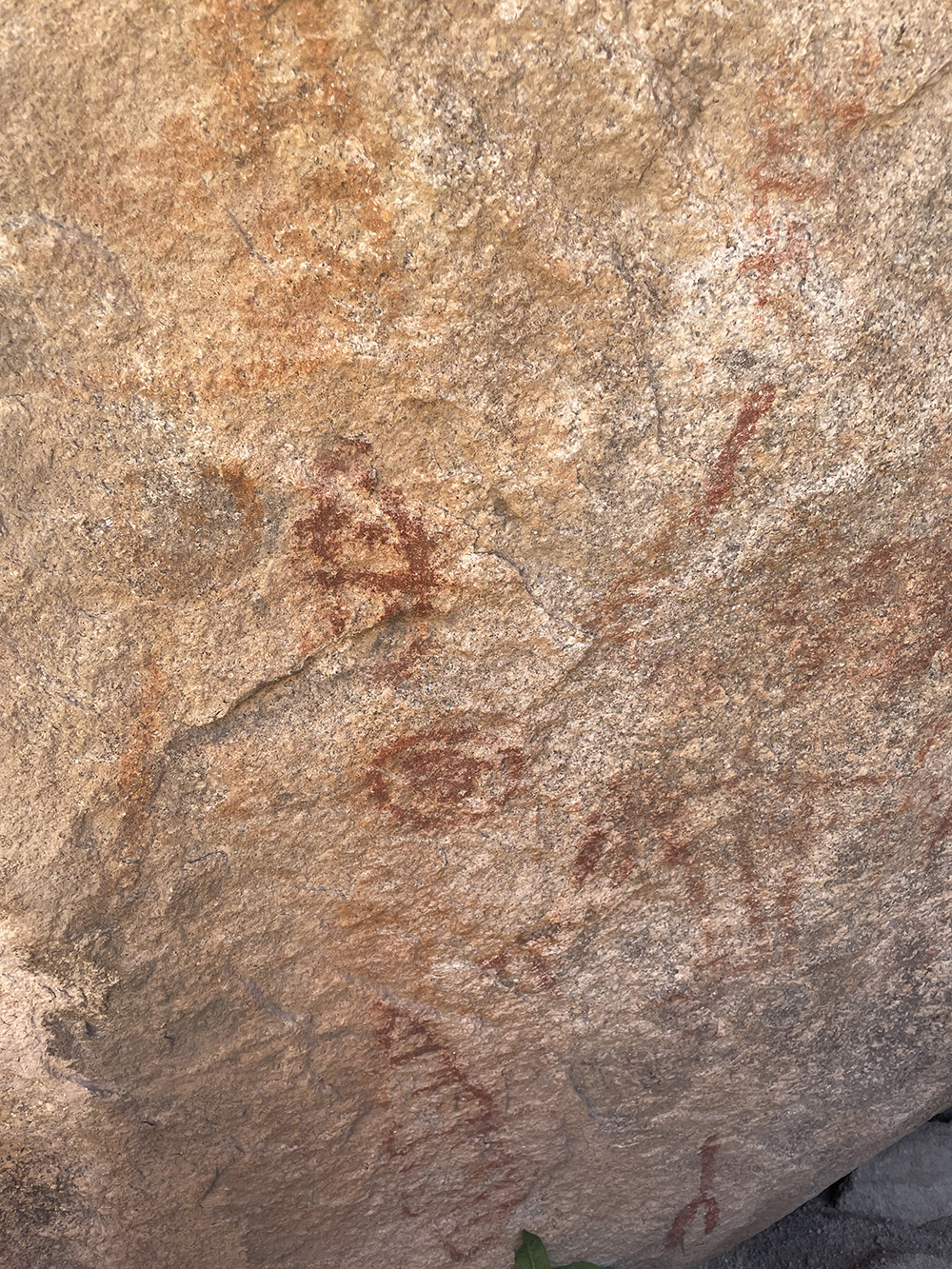 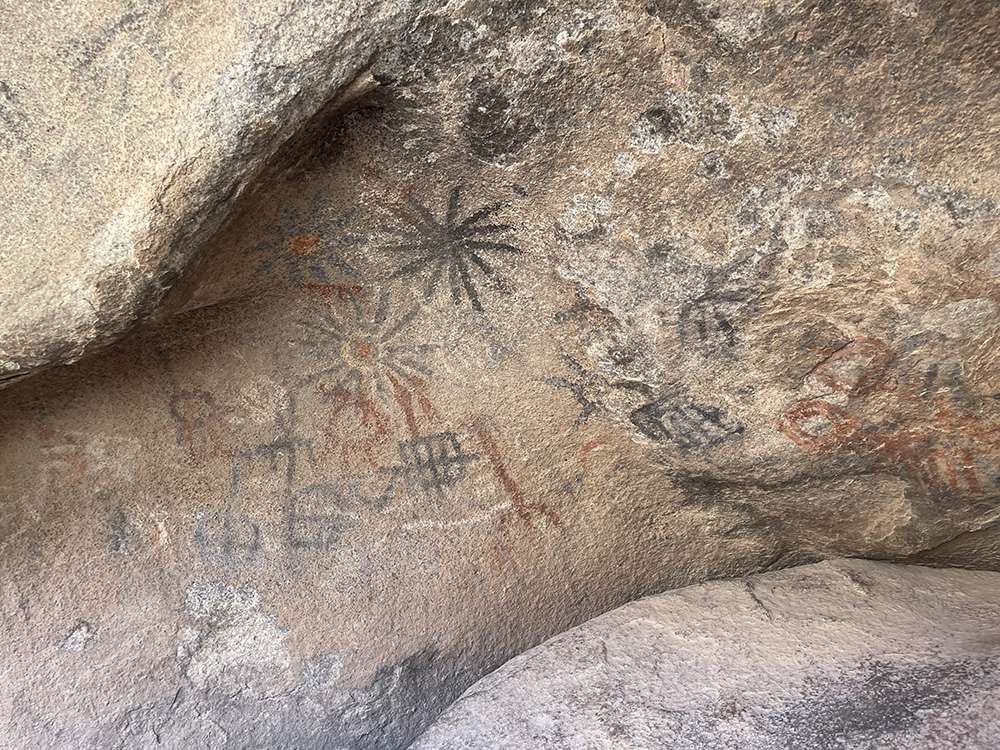 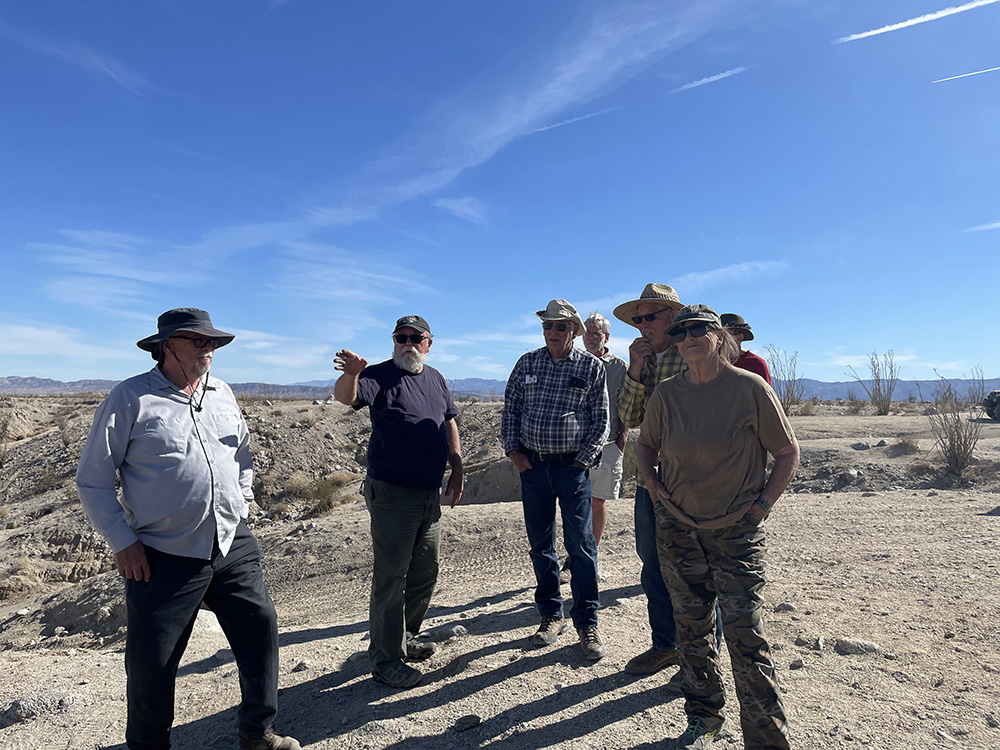 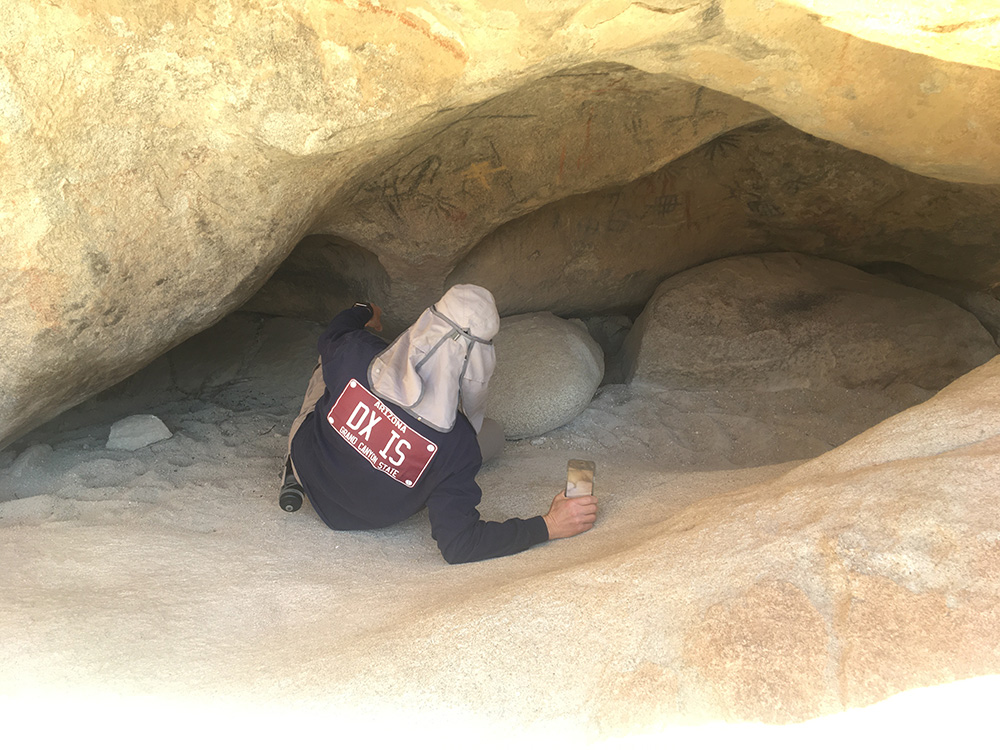 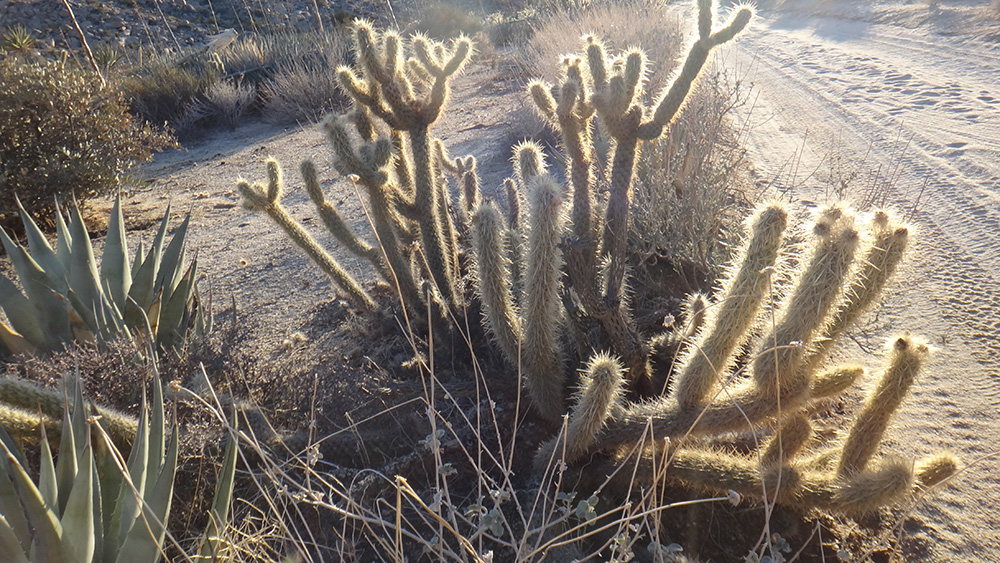