Exploring the Apache death cave is an experience that haunts me to this day.  I had read about the history of the area and was drawn to explore this patch of Route 66 in Arizona. We hiked down to the cave opening and fell silent.  The story was so horrifying that we could only imagine what terrifying secrets were buried there.  We were a few yards off Route 66 standing on a rock ledge above the Apache Death Cave in Two Guns Arizona.

Two Guns is located between Meteor City and Twin Arrows, some thirty miles east of Flagstaff.  The off ramp is marked however from the road only a few crumbling buildings are in sight giving no indication of the massive canyon.  We parked and walked into the area and were faced with a stone structure bearing a sign in large black letters “MOUNTAIN LIONS.”  Although the story of this crumbling cage and others around it is of great interest, it is the plight of the Navajos and Apaches years before that continues to permeate the air with the stench of death.

In the canyon where we stood, there was a dense Indian population from 1050 to 1300 A.D. where inhabitants could take advantage of the fertile soil and the canyon walls that protected them from enemies.  This practice continued even into almost modern times.  Although tribes have passed through the Two Guns area for years, 1871 found the Navajo settled in the fateful canyon seemingly protected from the outside world.  However, their feeling of security waned as a series of Apache attacks began.  Their homes were torched, and possessions stolen.  Apaches made off with their children and women as well as their sheep and horses,  Escape by the culprits befuddled the Navajo.  The paths in and out of the canyon were few and although the Navajo guarded them, they could not find the escape routes of the raiding parties.  Where could they have escaped?  Then one day as a Navajo party patrolled the canyon, voices were detected reverberating through a canyon wall.  Investigating the weird sounds, the Navajo discovered a crevice below the earth which led to a vast underground cavern.  The mystery was solved; the hiding place of the murderous Apaches was found.

Blocking all avenues leading into the cave, the Navajos prepared to bring their enemy to justice.  Stuffing dry sagebrush and fallen wood into the passageways, they torched the tinder and waited for the agonizing screams of the raiders.  Smoke filled the cave, and the desperate enemy attempted escape, only to be cut down by a barrage of bullets.  Taking desperate measures, the Apache slaughtered their horses, quartered the carcasses, and stuffed them into the passages to block the smoke.  Meanwhile the Navajo kept the fires burning.  This attempt by the Apaches to save themselves failed, and soon the screaming subsided and the night became still but for flickering embers floating to the sky.

Were the kidnapped Navajos dead among their Apache captors?  Was anyone left alive?  The Navajo scouts removed the seared horse corpses and peered into the macabre scene below.  The Apache victims of Navajo revenge produced a horrifying scene of grotesque faces frozen in the act of attempting a last breath.  The kidnapped Navajos had apparently been tortured and killed before the cave hideout was discovered.

The Navajos eventually continued life as usual in the canyon, and Apache raids were never again a problem.  However, a fog laced with death was said to settle in the canyon each morning, reminding the Navajo of that fateful day their revenge was executed.

We could see the cave entrance, but none of us would attempt the descent.  We just stood there perched over the scene and thought about the history of the area and the disturbing events of 1878.

At the turn of the century this area saw wanderers, prospectors, cowboys, sheepherders, Indians and businessmen pass through, as well as camels led by Lt. Edward Fitzgerald Beale as he paraded them through the desert on his way to Ft. Tejon. Stone buildings were constructed, and businesses attempted.  Probably the most famous attempt to bring tourists to the Two Guns area was the idea of Harry E. Miller who called himself Chief Crazy Thunder.  He built stone structures which became wild animal cages and advertised his venture as a Lion Farm.   In 1924 a post office opened in the area under the name of Canyon Lodge and Miller became the postmaster.  His zoo boasted snakes, cougars, mountain lions, Gila monsters and hundreds of animals native to the area.  His enterprise attracted tourists from near and far.  When he abandoned his Lion Farm, the cages relented to the elements although today some foundations stand and are fun to explore.

Preparing to leave Two Guns we were aware of a pending storm.  Flash floods had plagued Phoenix the day before, so we headed back to Flagstaff a bit shaken by our experience.  The story of the Apache Death Cave is a part of history that haunts me to this day.  ~ Claudia 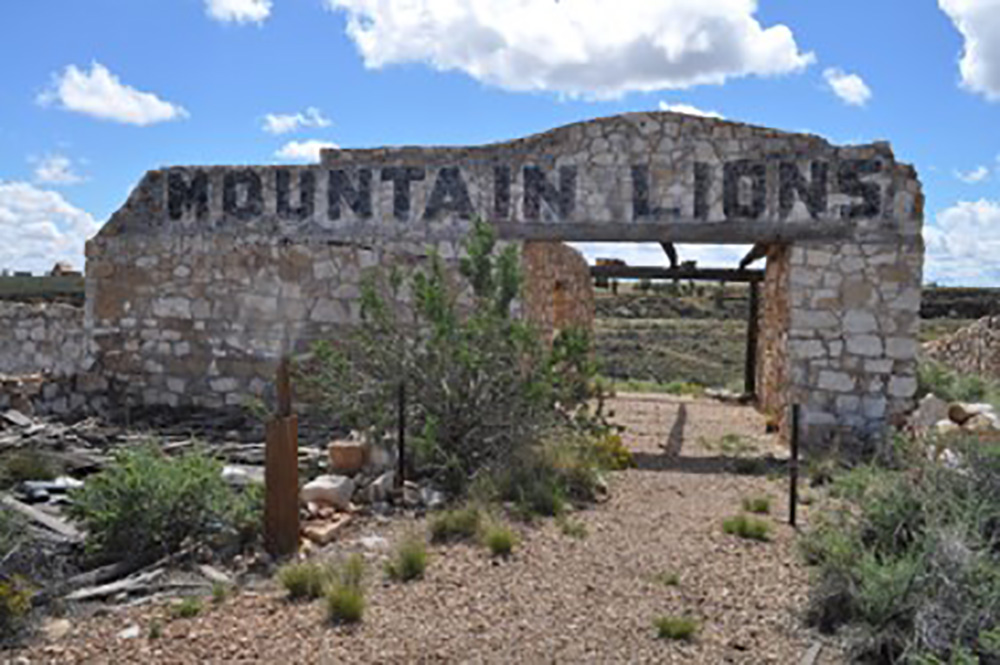 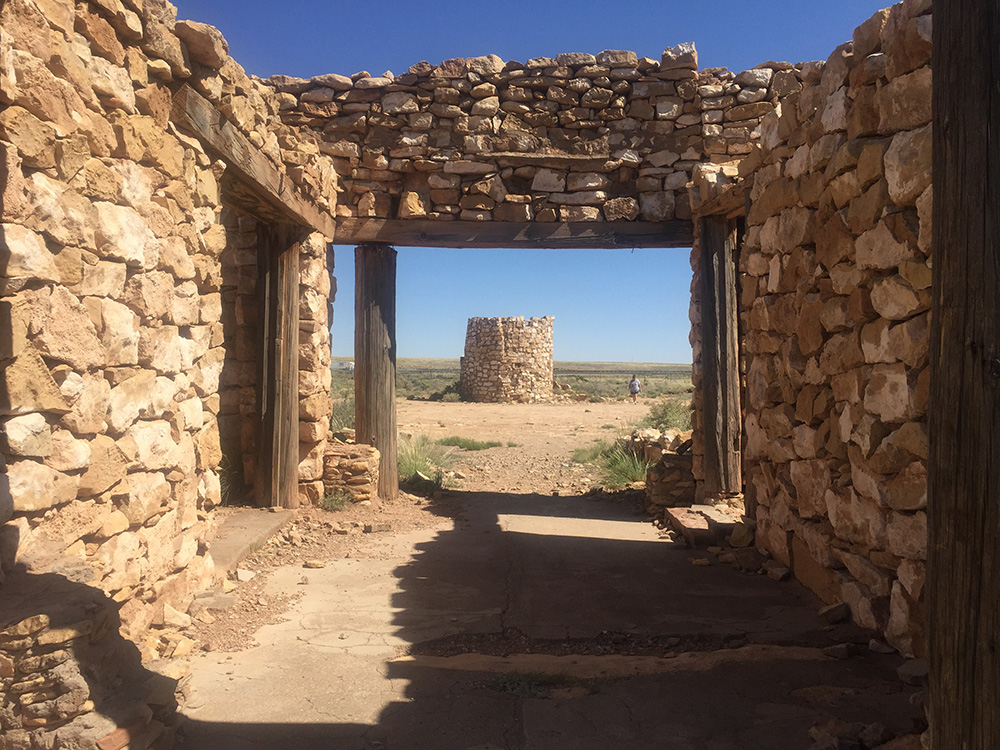 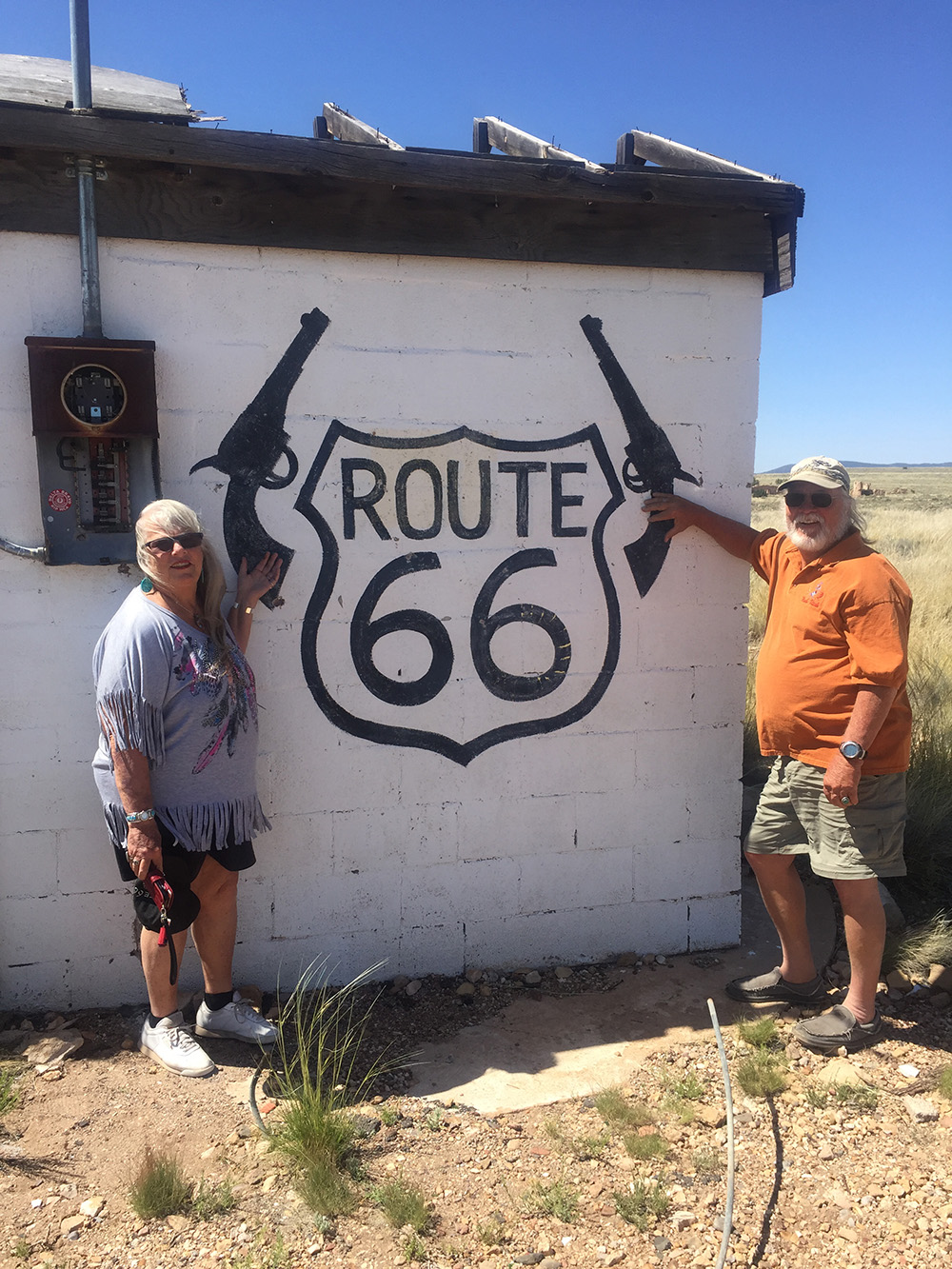 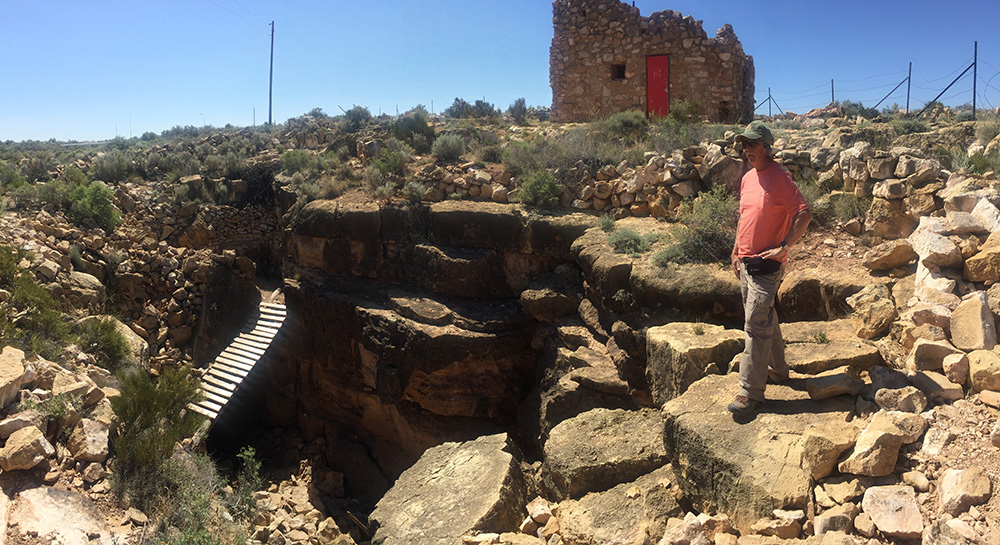 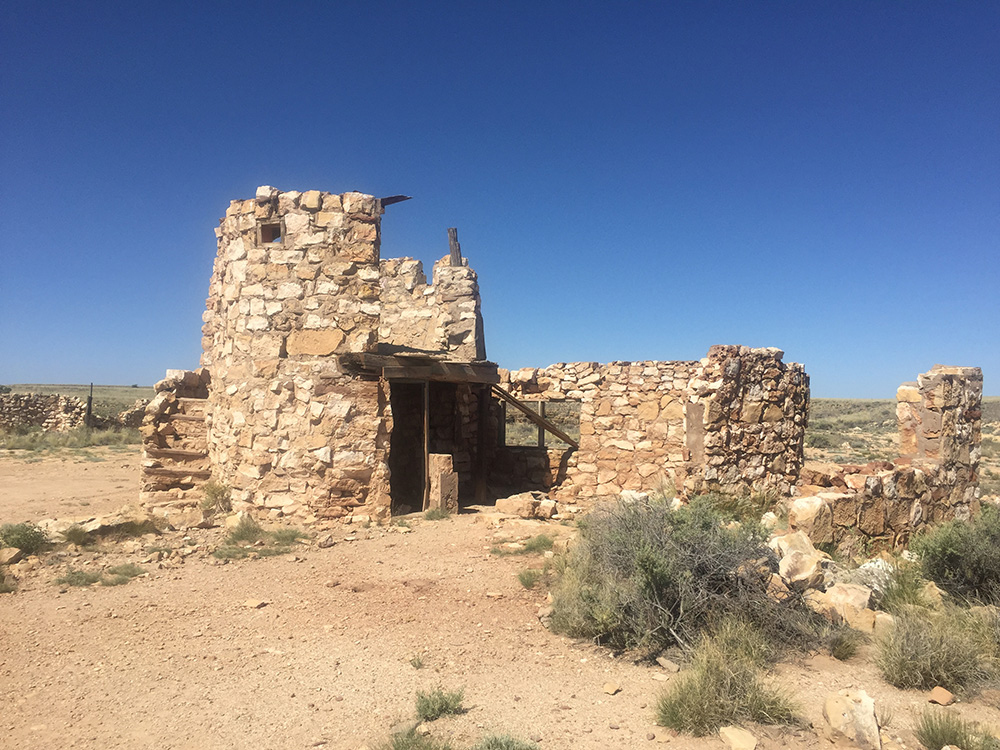 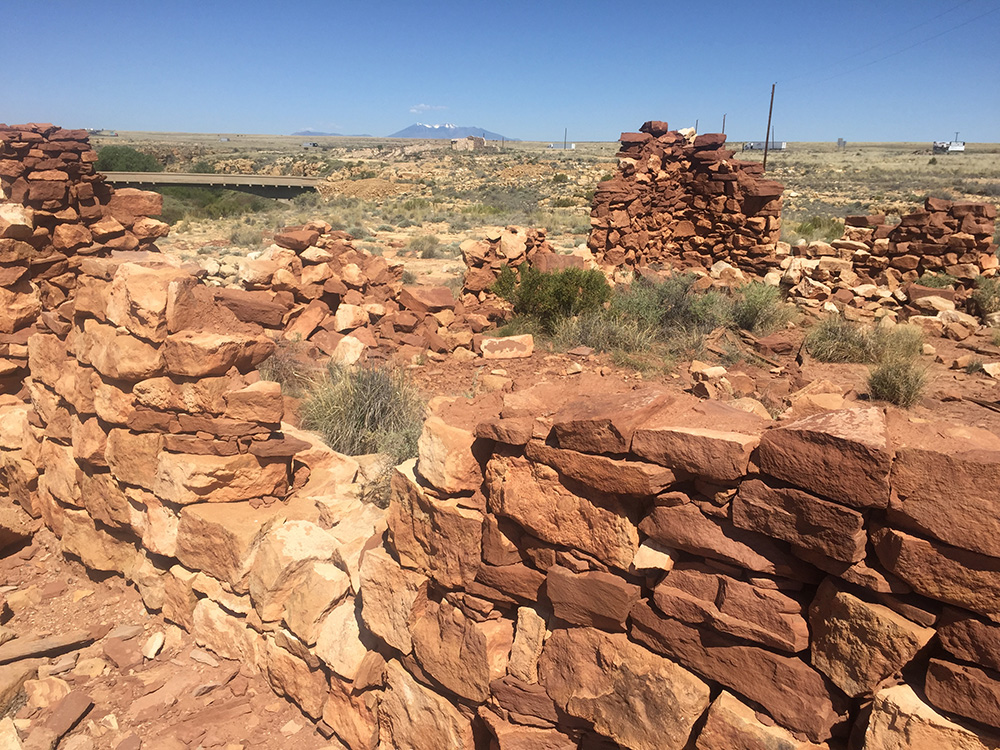 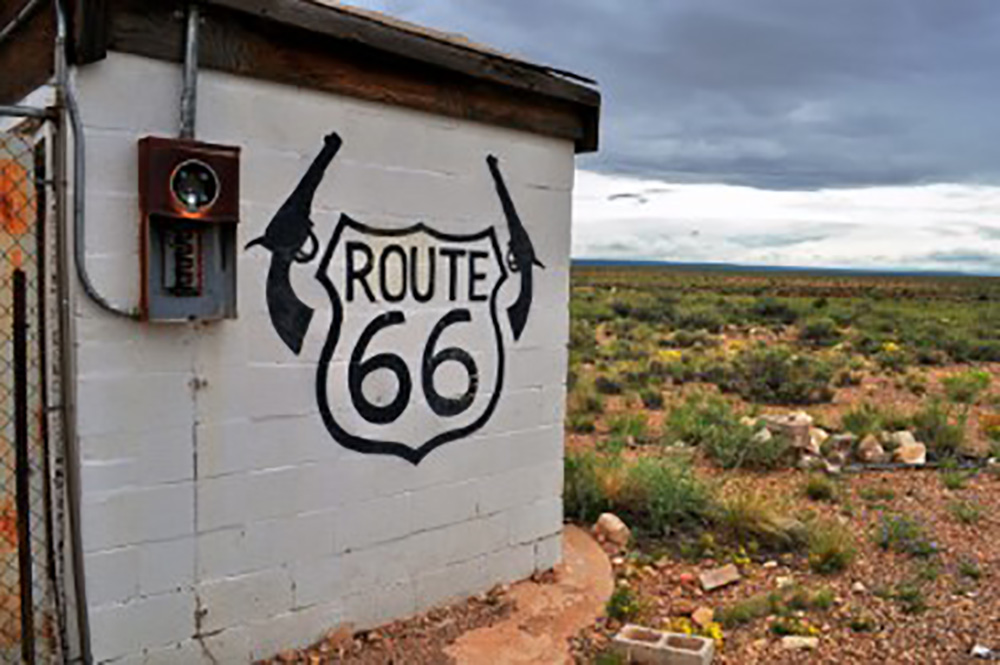