Desert Rats I Have Known

Desert Rats I have Known

I have lived in the desert for 45 years and in that time I have met some very interesting people. Most folks who come to the desert only see its splendor and majesty from the road. Most don’t see past a golf course. I moved here because my friends and I from high school would often drive out to the desert. We liked to explore, hunt, and shoot, and people thought us weird even then. Others were “into” surfing and other things. Each of us had a .22 rifle and some of our dads owned shotguns. We frequented various parts of the desert hunting rabbits, doves, quail, and an occasional duck. We were outdoorsmen, and we’re still avid about the desert, mountains, and wetlands. It has been said that the only constant is change. I thought of the desert as timeless and that my discovery would always be here as I remembered it. Much of where I used to roam freely is now developed in golf courses and condos, and it is in the city limits, or posted, gated, fenced, or we are legislated out. I hunted literally across the street from my house and saw every kind of living creature that lives in the desert.

There is a subspecies of the human race known as the “desert rat.” He’s not a true rodent, but no one knows much about them, where they’re from, what they live on, or what they do every day, He is not the same as what is now referred to as “homeless.” The desert is their home and they have adapted to it.

Such a man was “Andy the Donkey Man.” Andy owned about a dozen burros and lived in a tiny trailer near Highway 111 in Palm Desert. He had no car, no family, or visible means of support. People who befriended him brought feed for his donkey. People would bring their kids to feed the donkeys by hand and make donations to Andy. He was small, didn’t talk much or move very fast, and wore a large cowboy hat. At night he would walk along the highway to a bar and have a beer, and then walk home to his trailer. I don’t know exactly how long Andy lived here but he was a fixture in Palm Desert and everyone knew him. He was what they have in many resort communities. Laguna Beach had “the Greeter” who waved at all the cars driving along the Pacific Coast Highway. Andy was losing his eye sight and it was learned that he had cataracts. Some people took up a collection for an operation to restore his vision. Before long they had enough money for the operation and had volunteers to care for his donkeys during his recovery. Andy lived there for a few more years and continued his nightly ritual. Sadly one night while he was walking home from his favorite beer joint, he was struck from behind by a car and was instantly killed. The driver wasn’t charged as it was very dark and Andy was on the highway. The donkeys were given up for care by the Humane Society.

Les Chadoin was a prospector, artifact collector, and gold miner who had a pickup and camper, and a lot of stories. He would invite me to go with him to show me springs, oasis, Indian petroglyphs, and all kinds of wonderful things he had discovered and that only he knew about. Les was a tall man with very large ears. When he found out I liked hiking and exploring he was ready to have me join him. I accompanied Les on a few day trips, but never very far out in the wilderness where he would have liked to show me more. I always had other things to do, my family needed me more, and I always thought there would be more opportunities. Les died of a heart attack and it is one of my deep regrets that I didn’t learn more from him.

Ross was a hermit who lived on top of a sand dune in a teeny little concrete building. He owned his sand dune and the ten acres around it. One of his very few friends owned the adjacent ten acres and they devised a plan to irrigate it and raise hay. Ross leveled, plowed planted, watered, and cut his hay and got a yield of eighty bales the first year. It was his last year and he didn’t bother with it the next year. He acquired the adjacent ten acres of sand and tumble weeds. Ross didn’t own anything because it would get stolen. He had a very old four wheel drive truck that he used to go to the beer joint every night so he could watch television. One of his quirks was that if you started him talking about any subject, he would give you the whole history from beginning to the end of whatever that subject was. Such was the story of his hay growing venture. Eventually, progress made its way to Ross’ front door and he was paid a visit from a man who wanted to buy his sand dune, tumble weeds and all. Ross was paid $50,000 per acre for his little piece of paradise and it is now a part of the El Dorado Polo Club.

There was another Les. He was Les Shockley. He lived out in the canyons and rocks and drove a Jeep. I used to see him and talk to him about the old days, when the Army moved in to the desert to train for desert warfare in North Africa during World War ll. He told me about General Patton’s headquarters at what is now Palm Desert. He knew everything about every part of the desert and all of its animal life. One thing curious about these old desert rats is that they are very friendly and willing to open up to anyone willing to listen. They don’t seem to be afraid of strangers. Years later Les learned he had cancer and he drove his Jeep off of Vista Point where the hang gliders launched from. A witness said he made several passes before he took his final run.

Harry Oliver was a weird old guy who lived in Thousand Palms. He built himself a fort from adobe and called it Fort Oliver. He published a newspaper and printed it on a cardboard much like a restaurant menu. He said it was the only newspaper in the world you could read in the wind. He died and was cremated and his ashes were placed in an ammo can and buried in his “fort.” The fort is no longer there, but there is a street named “Harry Oliver Road.” 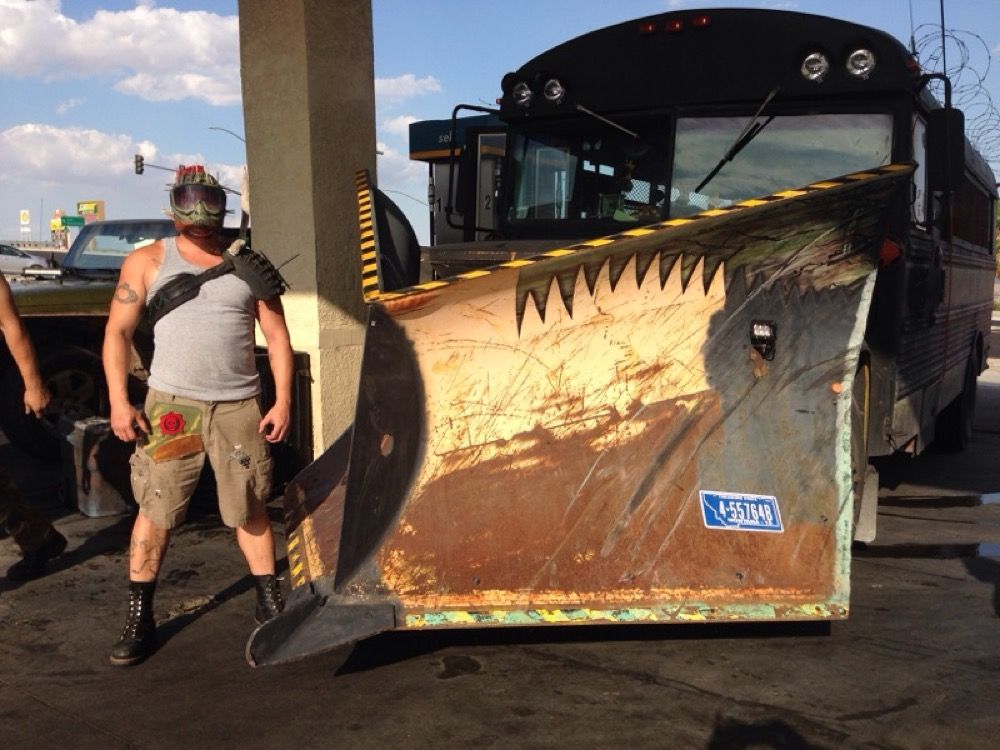 Steve and I were enroute back from a trip and we ran into a group of creative folks headed to “Wasteland.” The gathering occurred this year on September 22-25, 2016 in the desert near California City. This started as an annual gathering in 2010. According to their website:

“Join over a thousand attendees coming from all over the the United States (and beyond) to gather in the Southern California desert for a four-day post-apocalyptic festival. Set up camp at our wasteland compound, surrounded by specially-built sets. Costumes are required and post-apocalyptic campsites and vehicles are encouraged. Live for four days in a world pulled straight out of the Mad Max movies and other post-apocalyptic films and games, beyond the grip of so-called civilization.

Top DJs and bands from all over will provide the soundtrack, fire dancers and bonfires will light up the night, and modified vehicles will shake the earth with their engines. Don’t miss it!

This is an ADULTS ONLY event.

• Live bands &top DJs from California, Nevada, Arizona and beyond

•           An armada of post-apocalyptic vehicles from all over the country

•           Wasteland merchants vending their wares and services in “Bartertown”

I asked if the event was similar to Burning Man and after hearing a few expletives, I was informed that this “full immersion” event should never be associated with Burning Man. The group had traveled all the way from Montana.

How To Get A Good Night's Sleep

Tom Church and I decided to sell TipTop houses. There were some sample houses in Nevada. The agent that contacted us was rather strange. Managing the house sales was a side business. His main occupation was making crocheted tassels for the chorus girls in Las Vegas shows. I don’t know if he custom fitted them, but didn’t doubt it. We drove up and looked at the houses, then stopped in Tecopa for dinner on the way back. During dinner, a terrific windstorm came up and we drove across the street to a heavy cluster of tamarisk to get our vehicles out of the wind for the night. It looked like the trees grew metal babies as the area was filled with cars whose drivers obviously had the same idea. Where to go?

I had the bright idea to drive down to Afton Canyon campground along the Mojave River. The wind and blowing sand were blinding but at least the wind was blowing from behind us. We made it down to the campground about midnight. It was empty, a gentle breeze was blowing and it was beautiful and quiet. I chose to sleep in the back of my truck with Buster (the club mascot). Tom put his sleeping bag on top of a picnic table, then we crashed, so tired.

Not long after I went to sleep, I woke up with a start at the sound of a siren, and a truck going in circles all over the campground with red and blue flashing lights. After about five minutes of this frightening display, the truck stopped by our vehicles. The sheriff got out and explained that they had been chasing a murderer from Las Vegas and he stopped on the Freeway, jumped out, and ran down the dirt road toward the campground. He asked, “Have you seen him?” Of course we hadn’t. The sheriff then said in a confident tone, “Well, let us know if you do as we are sure he is around here somewhere.” Leaving us with that cheerful thought they drove away.

Too tired to pick up and drive anywhere else, we decided to take our chances. Buster and I retired back in the truck and Tom stayed in his sleeping bag on the table. At first I could not hear a soda can shifting in the breeze, but Buster could and would growl at it. Sure it was the murderer, I was on full alert, but nothing happened. After about the third time, I heard the noise and realized that if it was the murderer he had shrunk into the size of a soda can and donned an aluminum suit labeled 7-UP. By morning, Tom said he did not fare much better. The breeze would lift the sleeping bag up off his back a little and he was sure the murderer was lfting it off his neck and looking down at him.

We did not linger that morning and promptly got ready to drive home. No sign of another human being which made our leaving much more pleasant. It’s amazing how scared a person can be who has such courage tackling obstacles with a 4x4 in the company of the Desert Explorers and bright sunshine.

PS We never sold any houses.